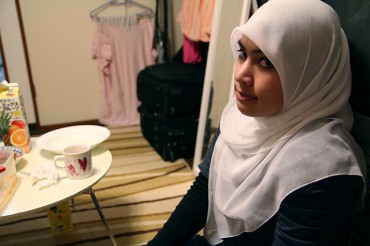 The freedom to dress as we wish is a right taken for granted on American campuses. But that’s not the case for students in every part of the world.

Last week criminal charges were filed against several women at the Karnataka College in India who had boycotted classes and organized a sit-in. Why? Because they wanted to wear a headscarf on campus, even though it has recently been banned from university classrooms. Protests have now been going on for several weeks, with students demanding freedom of dress. So far, college officials refuse to alter the policy.

What’s so threatening about wearing a headscarf? The headscarf has long been a symbol of the complex role of women in the Islamic world: Does it stand for religious conviction or oppression? For personal, independent faith, or for gender inequality? Whatever it represents, wearing a headscarf on campus is, in many parts of the world, a controversial political or religious symbol. In India, where Hindus, Muslims and Sikhs have long been embroiled in violent political conflict, educators seem to have decided it’s best to prohibit these messages all together.

India isn’t the only nation where the headscarf has been banned on campus. I spent last semester studying at a university in Istanbul, Turkey. I was shocked to discover that only since the previous spring have female students been allowed to wear headscarves on campus. For a Muslim-majority country, that should make you scratch your head, covered or not.

“It is all about politics,” says Derviş Hoşça, a student at Yeditepe University in Istanbul. “In some periods these kind of freedoms are banned, but in some periods people can take their freedom back. These periods depend on which political party takes the government.” Ever since the 1920’s, Turkey has been trying to convince the world that it is as modern as any Western state, and has generally assumed it must “Westernize” in order to do so. According to some lawmakers, this means keeping symbols of traditional Islam out of the public sphere as much as possible.

But in the end, there exists no clear definition of “modern” or “the West,” much less what it looks like on a female body. In America, many women wear a headscarf every day, and take it for granted that they can wear it on college campuses without compromising either their patriotism or religion. Roger Clegg, President of the Center for Equal Opportunity, says, “It would be hard for a public university to ban a Muslim head scarf without running afoul of the First Amendment. And it is hard to argue that wearing a head scarf (or yarmulke, or crucifix, etc.) labels one as less than fully American.” The Turkish government, on the other hand, has at times concluded that publicly wearing a headscarf makes a woman less than fully Turkish.

So what does the presence of the headscarf represent on American campuses? Is it in any way a problematic imposition of Islam into American culture? Heather Keaney, professor of history and Middle Eastern studies at Westmont College, says it needn’t be viewed that way. “We all have to guard against reductionism regarding the headscarf, when, as we know, there are a million reasons why women wear one. I suspect many in America see the headscarf as a symbol of women’s oppression. But if a woman is choosing to wear a headscarf as an expression of her religious beliefs, then it embodies some of the core values of America.  If a college campus is about engaging with and appreciating diversity then certainly women who choose to wear a headscarf have a valued place.”

From hippies to hipsters, students have long understood the ability of fashion to speak strong messages. The headscarf is an article of clothing that carries a particularly strong message across the world, frequently igniting debate when it is worn—or banned. Thankfully, American students have the right to choose whether or not to wear it. It’s a freedom we should remember and protect.