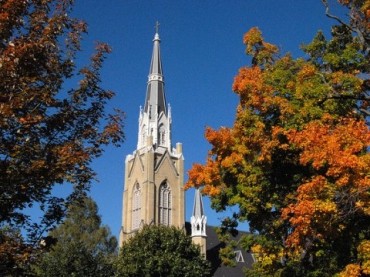 A controversial new course at the University of Notre Dame on “white privilege” launched recently despite a tidal wave of criticism from conservatives, Catholic groups, and even many students and alumni who suggested the subject matter is biased, inflammatory, and meant to shame white people and indoctrinate students.

But the three co-teachers of the one-credit, six-week seminar are remaining silent about the national censure they endured and the many questions and concerns about the class curriculum.

Outlaw declined to comment to The College Fix when asked about the material being used to teach the seminar. Neither Cannady nor Bradley responded to the Fix’s request for comment as well.

According to Notre Dame’s class listings, eight students have enrolled in the course.

In order to participate, students had to complete a 15-20 minute interview prior to acceptance. The seminar’s description states that “the goal for each participant is personal transformation: to leave the class… more aware of injustices and better equipped with tools to disrupt personal, institutional, and worldwide systems of oppression.”

“[P]eople consciously and unconsciously simultaneously participate in and are affected by systems of oppression. However, since these behaviors can be learned, they can be unlearned.”

The course includes a university-funded trip to the annual White Privilege Conference, which is being hosted in March in Louisville, Kentucky. The website for this conference states the fee for one college student is $195. That adds up to $1,560 for eight students, not including travel costs and fees for professors.

Notre Dame spokesman Dennis Brown told the Irish Rover independent campus newspaper in an interview that covering such costs is not out of the ordinary.

“The university will assist with funding for the conference,” Brown said. “There is nothing unusual about such funding for student participation in for-credit, off-campus experiential activities.”

When asked about the definition of white privilege and the logic behind awarding credit for this class, Brown replied that all universities explore complex issues.

“The theory of ‘white privilege’ is a well-established area of academic inquiry within sociology and certainly is a subject worthy of close examination by students who are interested in better understanding race relations,” Brown explained.

But many critics have called the conference anti-Christian. As the Cardinal Newman Society reported, recent workshops have accused Christianity of “punishing the poor, destroying the environment, and contributing to the war on terror.”

A highly influential Notre Dame alumnus and donor, troubled by the prospect of the course, wrote a letter to Outlaw in December noting the potential detriments of sending students to the white privilege conference. A copy of the letter was obtained by The College Fix. The alumnus has asked to remain anonymous.

“An unintended, but predictable, effect might be radicalization that teaches them more about the effectiveness of street methods (cop hating, traffic disruption and property destruction) than it does about an empathetic, Christian love of all men who we believe have been made in the image and likeness of God,” the alumnus said.

The alumnus later told The Fix that he received a phone call from Brown in reply, not responding to his specific concerns, but notifying him that Outlaw had received the letter.

College Fix reporter Alexandra DeSanctis is a student at the University of Notre Dame and managing editor of the Irish Rover.