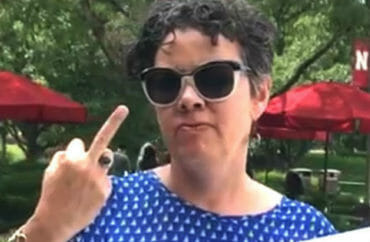 A former University of Nebraska-Lincoln instructor and graduate student who yelled at a conservative student lost her lawsuit arguing school officials unfairly penalized her for “participation in an on-campus protest,” according to the suit.

She has no plans to continue to fight the university and appeal the ruling.

Courtney Lawton, who has since finished her doctorate degree, unsuccessfully argued that UNL officials punished her when it reassigned her from teaching in 2017 after video circulated of her holding a sign and berating a student near a Turning Point USA display.

“Courtney Lawton’s ‘protest’ was an attempt to stop me from peacefully exercising my free speech rights on campus,” Mullen wrote in an email to The College Fix.

“She used threats, intimidation, and her position with the University to cancel me and my efforts,” Mullen said. Her actions violated my rights and the judge rightfully dismissed her attempt to profit from her wrongdoing.”

“I was denied justice and I still believe that my First Amendment right to freedom of expression was violated,” Lawton told the Lincoln Journal-Star on June 23.

Judge Brian Buescher, a federal district court judge, ruled in favor of the university’s motion to dismiss the case on June 7. Buescher cited Lawton’s failure to include a video of her counter-protest, despite the fact the video “has been widely distributed,” according to the opinion.

According to Buescher, without the video, Lawton’s lawsuit lacked enough information for the court to determine whether she had engaged in speech protected under the First Amendment.

Buescher also found that the Eleventh Amendment, which confers immunity on the states from lawsuits, barred Lawton’s suit.

He also held, among other findings, that Lawton had failed to allege essential facts.

“We are pleased with the resolution of the lawsuit. Beyond that, we have no comment,” Leslie Reed, public affairs director at UNL, wrote in a June 29 email to The Fix.

Lawton listed four claims against the university in her lawsuit, filed January 10. First, she claimed university officials denied her due process because she never received a hearing prior to her removal from teaching. Second, Lawton claimed that she was deprived of income when she was removed from teaching.

Lawton also claimed the defendants discriminated against her by not also disciplining other students who had engaged in political speech, according to her complaint. Lastly, Lawton claimed the defendants discriminated against her based on her sex by disciplining her but not also disciplining male students who had engaged in other types of political speech, such as kneeling during the National Anthem at a football game.

Lawton sought financial compensation for, among other things, the diminished value of her degree, loss of income, diminished employment opportunities, humiliation, and mental anguish, according to the complaint.

The College Fix could not locate contact information for Lawton.

The Fix contacted the university’s Turning Point USA and College Republicans chapter to ask whether they had any other interactions with Lawton or other faculty and for their views on appropriate sanctions, how instructors could express disapproval of student ideas, and the use of “free-speech zones” at UNL. It has not received a response.

The Fix also contacted Hans-Joerg Tiede of the American Association of University Professors to ask whether he believed the dismissal set a precedent. It has not received a response.

Editor’s note: The article has been updated to include that The Fix could not find contact information for Lawton. 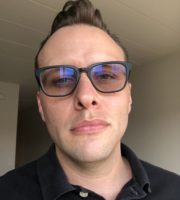