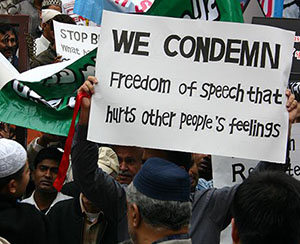 Serhat Tanyolacar, an artist and visiting assistant professor at the University of Iowa, erected a display at the school’s “Pentacrest” depicting coverage of over a century’s worth of “racial tensions, riots, and killings.”

The display was a large Ku Klux Klan effigy with headlines and newspaper articles all over it.

Professor Tanyolacar says that the display “was meant to highlight how America’s history of race-based violence isn’t really history and ‘facilitate a dialogue.'”

However, university officials removed the display because it was “deeply offensive” to “members of the community.”

Iowa issued a statement to all students and staff which said “The University of Iowa considers all forms of racism abhorrent and is deeply committed to the principles of inclusion and acceptance.” College President Sally Mason shared the following:

The goal of the University of Iowa, as a higher-education institution, has always been to provide an environment where all members of our campus community feel safe and Friday, we failed. On the morning of December 5, 2014, a 7-foot tall Ku Klux Klan effigy with a camera affixed to the display was installed without permission on our campus. The effects of the display were felt throughout the Iowa City community. That display immediately caused Black students and community members to feel terrorized and to fear for their safety.

The university’s response was not adequate, nor did that response occur soon enough. Our students tell us that this portrayal made them feel unwelcomed [sic] and that they lost trust in the University of Iowa. For failing to meet our goal of providing a respectful, all-inclusive, educational environment, the university apologizes. All of us need to work together to take preventive action and do everything we can to be sure that everyone feels welcome, respected, and protected on our campus and in our community.

Seriously? How exactly does a piece of art whose message is anti- racism cause people to feel terrorized? Are we truly raising the Aggrieved Generation, where everyone born since the dawn of the Internet is trained to be perpetually on the lookout for something — anything — to piss them off?

The Pentacrest is a known university public forum, and a debate about free expression arose.

On one side of that debate is Lyombe Eko, an associate professor of journalism who said that “The fundamental principle is that the Pentacrest is a designated public forum. In such areas, the university may not practice viewpoint discrimination.”

On the other is David Ryfe, the director Iowa’s School of Journalism and Mass Communication. Ryfe stated “If it was up to me, and me alone, I would follow the lead of every European nation and ban this type of speech.”

The display, portraying newspaper articles depicting coverage of racial tensions, riots, and killings dating from 1908 to 2010, was removed after UI officials deemed it “deeply offensive” to members of the community.

In a statement issued to the students, staff, and faculty, the university wrote, “The University of Iowa considers all forms of racism abhorrent and is deeply committed to the principles of inclusion and acceptance.”

As a result, the fear of squelched freedom of speech and academic freedom has emerged among UI faculty members and students.

Viewpoint discrimination occurs when officials discriminate against speakers based on their views.

“No matter how abhorrent it might be to segments of the university community, the work of art is protected by the First Amendment,” Eko said. “The University of Iowa can only impose time, place, and manner restrictions on Professor Tanyolacar [the artist], not ban his art on the basis of its content.”

“The university likely made a viewpoint-based distinction, and according to R.A.V. v. the city of St. Paul, the court generally cannot make such distinctions,” said David Ryfe, the director of the School of Journalism and Mass Communication. “But there are exceptions; this happened on a university campus for one thing.”

Ryfe said the Supreme Court allows all sorts of content-based distinctions made in the law, and the potential restriction of speech at hand depends on whether one believes hate speech is a legitimate part of the freedom of speech.

Professor Tanyolacar maintains that his display “was meant to highlight the truth of racial disparity that existed during the era of the Ku Klux Klan and still exists today.”

Knowing how the Left — in particular the academic Left — behaves, it is worrisome that a director of an American university journalism school (Ryfe) desires “freedom” of expression laws akin to that of Europe.

European nations do not have an analogue to the United States’ First Amendment, and as such many different types of “hate speech” are criminalized.

For example, in Poland people can be prosecuted “who intentionally offend religious feelings.” France bans “hate speech and insult, which are deemed to be both ‘public and private,’” and in ten European Union member states it is against the law to engage in Holocaust denial “or the denial of crimes committed by the Nazi and/or Communist regimes.”

Professor Ryfe did not respond to a request from The College Fix to elaborate on his remarks about free speech.