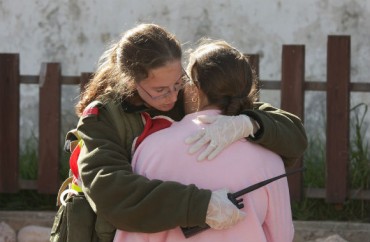 They spent 10 days in the Middle East, though

A major academic association is weighing whether to block Israeli academic institutions from even using its online resources, in response to Israel’s practice of “settler colonialism” against Palestine.

It would be the largest academic association yet to boycott Israel if the 10,000-plus members vote for that option.

According to the report, released earlier this month, the task force’s guiding principles include academic freedom, human rights and advocating for “disadvantaged groups.”

“As viewed through the frame of ‘settler colonialism,’ Palestinians constitute a disadvantaged group whose human rights are under threat, and some Palestinian civil society groups have asked AAA to intervene on their behalf,” the report states.

The only response that’s off for the table for the association is inaction, as determined by a unanimous vote of its membership.

Even a “statement of censure or concern” on its own is an “insufficient course of action” because of “the gravity of the Palestinian situation and the level of concern felt by many within the Association,” the report says.

‘Pick and choose as if ordering from a menu’

More than 1,100 anthropologists, “many of whom” are association members, are champing at the bit to boycott Israel entirely, having signed a petition asking the association to take that action, according to the report.

Other possible actions include a letter-writing campaign, economic boycotts, and broad or targeted academic boycotts of Israeli universities, the latter of which mirrors the approach of the boycott, divestment, and sanctions (BDS) movement.

“The BDS movement has laid out three conditions that it says must be met before a boycott would be lifted,” including an end to “Israel’s occupation and colonization of all Arab lands occupied in June 1967” and the so-called right of return for Palestinian refugees, the report states.

However, the task force admits that monitoring each of these situations is difficult, so it would be hard to determine when the conditions were met for ending the boycott.

No database for you

The report spells out different ways to apply a boycott, saying that “academic associations are, in principle, free to pick and choose as if ordering from a menu.”

The association could block Israeli institutions from accessing its AnthroSource database of publications and research, though the task force notes that action “would violate the AAA’s contract with Wiley-Blackwell.” It points out that a smaller group that voted to boycott Israel, the American Studies Association, “continues to make its journal available to Israeli universities.”

Ed Liebow, executive director of the association, told The College Fix in an email that the report is meant to present findings on the issue and suggest possible actions, and is not an endorsement of any action currently.

“The Task Force has identified issues embedded in this political situation that are relevant to anthropologists and to the Association,” wrote Liebow, a former public-health research scientist. Those include “conflict and historical memory, human rights, international law, identity, academic freedom, access to educational opportunities, scholarly exchange, and the uses of anthropology/archeology in political efforts, and they are subjects of great interest to many our members.”

Asked how possible remedies were devised, Liebow cited the report – “through interviews with more than 120 persons with specialized knowledge about these issues in Israel and Palestine, accompanied by a review of relevant scholarly literature and news accounts.”

Having no ‘expertise’ is a plus

However, as Inside Higher Ed noted, only one member of the task force has done fieldwork in the region, and three of them “took a 10-day trip to Israel and the West Bank in May” to hear firsthand accounts.

The president of the Israeli Anthropological Association, Harvey Goldberg, told Inside Higher Ed that he would not write a report about a country after only a 10-day visit.

The report itself says that five of the six task force members “are typical of most AAA members in not having deep histories of expertise in the region.” In a separate document explaining the selection of members, the association says that’s a plus, because they have “no public commitment to any given political stance on that conflict” between Israel and Palestine.

Aside from the 5,000-member American Studies Association, academic associations that have endorsed anti-Israel responses to the Palestinian issue have been much smaller organizations, as the report notes.

Another AAA board member, San Diego State University’s Ramona Perez, did not respond to Fix requests for comment.