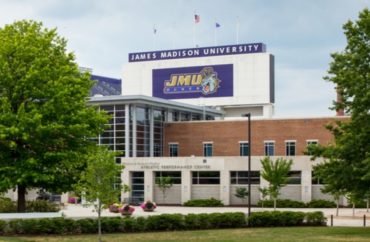 University must ‘have such conversations in ways that honor and respect all members of our community,’ the president wrote

James Madison University had released a mandatory social justice training video for its student employees for the fall semester that divided people into oppressor and oppressed groups based on race, sex, religion, age, and other characteristics.

Because of coverage by outlets including The College Fix and Fox News, university president Jonathan Alger released a statement on Friday announcing, “We have decided to pause the training in question for evaluation and review with a variety of JMU constituents.”

“These are challenging topics to discuss, and we know that they are important and demand a lot of thought and care. The ongoing work of the university can, and must be, to seek to have such conversations in ways that honor and respect all members of our community,” he wrote.

The Harrisonburg, Virginia, university also removed the video from YouTube, though fortunately The College Fix had saved screenshots of the charts that divided people up into myriad categories. 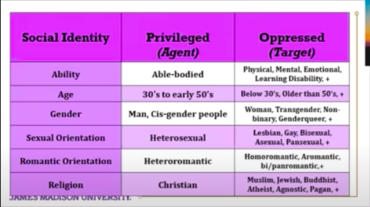 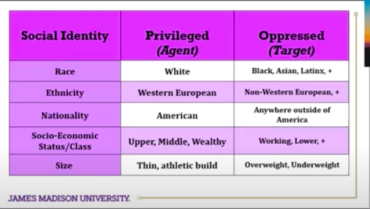 The Breeze, the official student paper of JMU, covered the controversy today. It noted:

Two of the slides they presented in the video feature tables that split “privileged” agents and “oppressed” targets, along with the social identities associated with both.

On the two slides, identities including “white,” “heterosexual,” “able-bodied” and “cisgender” were placed on the privileged side of the table. Identities like “Black, Asain, Latinx,” “gay,” “disabled” and “women” and “transgender” were placed on the oppressed side of the table. In the training video, Weed asks those watching to pause and reflect on their identities and if they had thought about them before or if they were “hyper-aware” of their identities. She notes that the identities and privileges or oppression are based on a U.S. context.

The student paper also noted that after one article was released, “student employees were told not to share the video with others once their training was completed” and pointed out that didn’t seem to do anything but fan the flames:

[M]any have taken to social media to comment on their opinions about the training video. Virginia Senator Mark Obenshain (R) commented on the training in a tweet while Virginia House Delegate for the 26th District Tony Wilt (R) made an email statement about the matter.

“Liberals love to assert that [critical race theory] is just made-up conservative propaganda,” Obenshain said in his tweet. “Take a look at the linked training video JMU is forcing on its student employees. I hope students don’t have to buy into this woke nonsense in order to hold campus jobs.”

In Wilt’s statement, he said he’s “shocked” that JMU student employees had to watch the training video.

“Look folks, forcing these ideologies down our students’ throats will get us nowhere,” Wilt said in the statement. “We need our educational institutions to get back to their intended purpose — providing a high-quality education for every student.”

While the training has been paused, it’s not clear exactly what that means for such initiatives from James Madison University in the future. Vice President of Student Affairs Tim Miller also released a video statement on the matter. The Breeze reported:

Miller said he believes that privilege is “a reality” and that it should be discussed for students to connect with and welcome diversity. Miller apologized for the impact the video had on the community and said he would “dedicate [his] efforts” to ensuring that JMU learns from the experience.