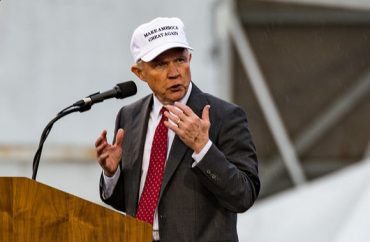 Staged walkout was ‘our contribution to the conversation’

Why challenge an invited speaker’s views when you can simply irritate everyone else?

The Trump administration appointee and former senator, invited by the Amherst College Republicans, didn’t have a chance to take bracing questions from critics.

Nearly 70 students “stood up and exited in a coordinated walkout” five minutes into Sessions’ talk, leaving more than half of the venue empty. They apparently weren’t convinced by Student editor Olivia Gieger’s column that liberals like her “owe it to ourselves to show that, unlike many Republicans, we listen to the other side and remain staunch in our beliefs.”

The outside protest started with a “land acknowledgment by a member of the college’s Indigenous and Native Citizens Association” and moved on to a Festivus-like airing of grievances by community activists.

An organizer of the student-run Direct Action Organizing Committee accused the College Republicans and funding sponsor Young America’s Foundation of using “power” rather than “free speech” by inviting Sessions to campus. The committee opposes Sessions, the CRs, YAF and “the global system of white supremacy which created them, which funds them, which feeds them.”

Student Andrew Rosevear told the Student the protesters’ refusal to challenge Sessions’ ideas directly was “our contribution to the conversation.”

Another protester, Samantha Schriger, said the protesters purposely took seats from others and then left the venue to “leave Jeff Sessions’ world and enter a different world where we can engage in activism in the valley.”

The notion that the comically left-wing liberal arts college is “Jeff Sessions’ world” is not borne out by Amherst’s recent controversies over viewpoint diversity and freedom of expression.

The student government threatened to derecognize the College Republicans for a private group chat between two inactive club participants that mocked the “Common Language Guide” released by the diversity office.

The CRs refused to capitulate and demanded full exoneration from the administration. Instead, President Biddy Martin publicly denounced the two inactive club participants for their viewpoint.

The administration, which was not informed about the Sessions event until early April, prevented anyone from outside the campus from attending, in the name of security.

It sought to distract the student body from the event by hosting “food trucks, a bonfire with s’mores, a self-care corner, wellness activities and an outdoor jazz concert” at the Keefe Campus Center. The center hosts the college’s Multicultural Resource Center, Queer Resource Center and Women’s and Gender Center among other organizations.

President Martin publicly accused the CRs of “cynical efforts to put us in a defensive posture” by inviting Sessions to the one-party state that is Amherst, according to the Daily Hampshire Gazette.

She then rejected a personal invitation from CRs leader Robert Barasch to attend Sessions’ speech right in the front row, according to an email exchange provided to National Review. “Why would you think I would come?” she responded.

Why, indeed? Amherst doesn’t even tolerate privately expressed wrongthink, and it charges a pretty penny for the petty fascism, as National Review notes: The total cost of attendance for the coming academic year crosses $80,000.

Read coverage by the Student, Gazette and National Review.