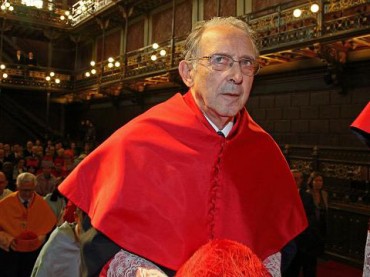 Loyola University-Chicago has a soft spot for liberation – from both oppressors and sexual restraint.

Twenty-five years ago, the Salvadoran Army killed six Jesuits in the rectory where Father Sobrino resided during the civil war that wracked El Salvador. A fellow Jesuit wrote in the National Catholic Reporter that Sobrino survived that day because “he happened … to be in Bangkok.”

The school will give Sobrino an honorary degree and he’ll deliver a public address, Loyola said in an email to the community, asking for faculty and students to sign up early for events: “We expect Father Sobrino’s address to draw a lot of interest.”

Sobrino is a noted advocate for liberation theology, popular in Latin American countries, which emphasizes liberation from oppressors and sees the works of Jesus in the context of social justice.

Sobrino received a notification from the Vatican’s Congregation for the Doctrine of the Faith in 2006 for several of his works, meaning he was accused of making erroneous doctrinal statements in speech or writing and had not revised them in response.

The notification specifically faulted Sobrino for claiming the early church councils were “dangerous.” It said he considers “the dogmatic development of the first centuries of the Church including the great Councils to be ambiguous and even negative,” and that he made questionable statements about the divinity and uniqueness of Christ.

Steve Christensen, a university spokesperson, told The College Fix in an emailed statement that while the university is aware of his notification, “Father Sobrino’s work on behalf of the poor, and his distinguished career as a theologian, merit this honorary degree.”

Christensen did not answer whether Sobrino’s presentation would acknowledge that his writings have been formally disputed by the Vatican.

Liberation theology is already taught at Loyola by a professor accused of taking liberties in his personal life – Miguel Diaz, a former ambassador to the Vatican.

He also teaches “Intro to Christian Theology,” which often includes sections on sacraments including marriage as well as moral theology, according to a sample syllabus on the Theology Department website.

While teaching last year at the University of Dayton, another Catholic school, Diaz allegedly made sexual advances on a married couple who were also professors.

According to a July 22, 2013 letter obtained by Inside Higher Ed, the Catholic university’s investigation – conducted under the “preponderance of evidence” standard – found that “Dr. Diaz created a hostile environment by engaging in unwelcome conduct of a sexual nature, particularly after being told to stop.”

As a condition of his continued employment at Dayton, Diaz was barred from talking about anything of a sexual nature “in any personal, one-on-one, private or otherwise intimate way” with any student, university employee “who has a position of less influence or stature” than him, or “invitee” to the university other than “immediate family.”

Loyola spokesman Christensen defended Diaz’s teaching of the Christian theology class in spite of his alleged sexual advances at Dayton, saying Diaz holds “the John Courtney Murray University Chair in Public Service” and is a “Professor of Theology.”

Christensen also defended Loyola’s offering of a liberation-theology class, calling it “a significant movement in the second half of the 20th century.”

The University of Dayton told the Chicago Sun-Times that Loyola didn’t contact the school to vet Diaz, who joined Loyola this summer.

Diaz has also served on the board for the Catholic Theological Society of America, a group of theologians known for taking socially liberal positions on issues. Multiple members have also received notifications from the Vatican.

Some Loyola alumni have also received notifications from the Vatican. Anthony de Mello, a Jesuit, received a notification for some of his writings, one of which said that Jesus was not the Son of God. De Mello graduated from Loyola in 1965 with a master’s degree, according to a Loyola alumni page.