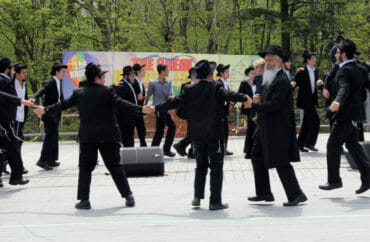 Are you going to let a Trump supporter lead the College Democrats?

You may think that only conservative Christian student groups are threatened when their public colleges order them to open leadership positions to students who don’t share their beliefs.

Certainly the highest profile groups to suffer under so-called all-comers policies are Christian groups such as InterVarsity and Cru. But they have company, at least in the Judeo-Christian sphere.

The Chabad Jewish Students Association is one of several groups challenging the University of Iowa’s decision to derecognize a fellow student club, Business Leaders in Christ, because of its “sexual moral conduct” rules for leaders.

The Alliance Defending Freedom filed a friend-of-the-court brief in BLC’s lawsuit on behalf of Chabad as well as Christian campus ministries Chi Alpha and 24:7, Christian apologetics group Ratio Christi and the Christian Medical and Dental Association.

The taxpayer-funded university is attacking the “very existence” of all these groups by persecuting BLC, according to the alliance:

Because personnel is policy, any organization dedicated to advancing a particular cause must ensure that those who lead it are actually committed to that cause. For religious student groups, their faith is the basis of their mission and forms their institutional identity. While religious student groups, like [alliance clients], invite everyone to their meetings and activities, they do require support of their basic religious convictions from individuals seeking to assume a leadership role.

The University of Iowa hasn’t targeted political or ethnic affinity clubs, but rather those groups “whose views are in the minority on public campuses” and are thus uniquely vulnerable:

Large and broadly accepted groups can generally defend their identity through sheer force of numbers and informal means of control. But smaller groups or less popular groups are far more vulnerable to takeover or harassment by students empowered to obstruct and even change the group’s unpopular stance.

The brief reminds the court that today’s orthodox religious groups were yesterday’s gay rights groups, and it brings up absurd scenarios that now seem plausible at the university:

A Democratic club with a Donald Trump supporter as its President, a vegan club led by a hunter, or a CrossFit club led by a couch potato will all have their expression altered by this new leadership – both internally in their messaging and externally in the perception of those the group seeks to influence.

The other strike against the university, according to the alliance, is that its “dramatic” but vague
“reinterpretation of the Human Rights policy” has left the longstanding Jewish and Christian groups unsure if they will be targeted next.

The public university “has at least three times” been asked to derecognize religious student groups  – including 24:7 – because of their leader-faith requirement in the past two decades, and it “has expressly declined to do so each time.”

It apparently lied to the Christian Legal Society 14 years ago when the university told the group that it didn’t need an exemption to the human rights policy because religious groups aren’t prohibited from imposing faith requirements:

Without altering the language or notifying religious student groups of any change in the interpretation of the language, the University has applied this same policy in exactly the opposite way, derecognizing BLinC.

In a press release Wednesday, the alliance accused the university of violating its own diversity and inclusiveness pledges to students.

Senior Counsel Tyson Langhofer said: “Today’s university students will be tomorrow’s legislators, judges, university presidents, and voters, but at the University of Iowa, they are learning that government can dictate who can lead religious student groups.”

Read the filing and alliance statement.

MORE: Christian clubs drop Christian requirement to get back into Cal State