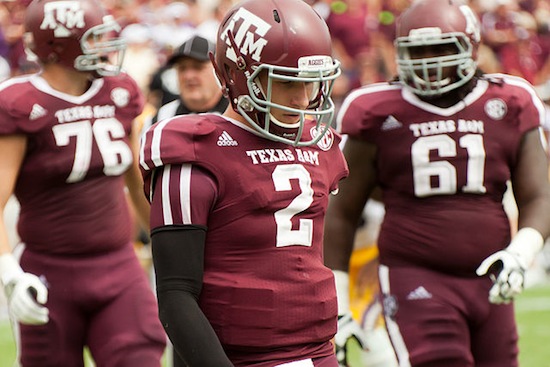 Heisman trophy winner Johnny Manziel is under investigation for allegedly taking money from autograph dealers–a violation of NCAA rules that would cost him is amateur status if proved true, and would make him ineligible to play college football.

Manziel was the subject of a long (and mostly sympathetic) feature article in the most recent issue of ESPN The Magazine by Wright Thompson.

Thompson portrayed Manziel as a young kid who struggled to cope with the intense pressure of his new-found national celebrity.

An arrest last year, plus some highly publicized outbursts on Twitter could all be explained, Thompson seemed to say, by Manziel’s youth. “Johnathan Manziel is a boy trying to become a man,” he wrote.

However, with the latest allegations that Johnny Football took money for autographs–the young star has shown a side of himself that hardly elicits sympathy.

An autograph dealer has a video showing Manziel signing hundreds of autographs in a hotel room. The dealer claims he paid Manziel $7500 for the autographs.

This growing scandal threatens the career of the biggest star in college football. And his family has hired an attorney to advise him during the investigation.

It’s reminiscent of the scandals that engulfed other recent Heisman winners. Representatives of former Auburn quarterback (turned NFL star) Cam Newton once sought payment of $120,000-$180,000 in order to secure his services on the field. Likewise, the family of 2005 Heisman winner Reggie Bush received hundreds of thousands of dollars from USC boosters–violations that led to Bush returning his Heisman.

I don’t condone the actions of Newton or Bush, or their families. However, there is something about the allegations against Manziel that is even more disturbing. And that’s the fact that Manziel, unlike Newton or Bush, comes from a wealthy family with a Texas oil fortune. The fact that Manziel is wealthy makes his alleged willingness to throw his entire college career away for a few thousand bucks even harder to comprehend.

Last year, Manziel’s daddy bought him a new Mercedes. The autograph dealer in this case says Manziel told him he took payment for autographs because he wanted “new rims” for his car.

So what you have is a kid whose family is loaded, who stands to make tens of millions in the next few years when he enters the NFL, riding around in his new Mercedes, and he doesn’t care enough about the ethics of college football or the legacy of the Heisman trophy, and in fact is (allegedly) so greedy that he will flippantly betray the confidence of everyone who has believed in him and invested in his success for a few thousand bucks that, most likely, his daddy would give him if be bothered to ask.

With these new allegations, it’s hard to think of Manziel as a nice young man struggling to cope with the pressures of fame, as Wright Thompson sought to portray him. It’s hard, indeed, to have any sympathy for him at all.

This isn’t a poor kid whose never had anything. This is a young punk who already has it all–who has everything, that is, but good character.

Sorry, I know that’s harsh. But pictures don’t lie. The young man, undeniably, was in that hotel room with an autograph dealer, signing memorabilia. There is a video to prove it.

So far, there’s no video footage of Manziel actually receiving cash for the autographs. As a result, there’s a chance still that Manziel may skate clean.

But his reputation has been permanently destroyed. The nation that wanted to make him a hero will no longer respect him. That’s a shame.

Let’s assume, for argument’s sake, that Manziel didn’t take any payment–that he simply signed hundreds of articles for the dealer just as a favor to a professional dealer. Even under such an implausible scenario, it would be an extreme example of carelessness and apathy to allow yourself to even go knowingly into a private room with an autograph dealer.

In the video, Manziel says if the dealer ever goes public with information about the signing, he will deny every having done it. “You never did a signing with me,” Manziel says.

Now several other dealers have come forward claiming that they too paid Manziel for autographs.

GM’s and coaches in the NFL are reportedly having serious doubts about Manziel’s suitability as a professional quarterback. They think he doesn’t have the character and maturity to lead a team.

He may be the most famous college football player in America, but he’s also shown himself to be a first-class fool. He’s willing to throw everything away–for what? New rims to add to his new Mercedes? What a waste.

Manziel has demonstrated an appalling sense of entitlement.

He needs to examine his life and take this year away from the game. Figure out what kind of person he wants to be. Maybe he can get his life together–turn things around. Let’s hope so. But in order to get started he needs to face the consequences of his actions.

Manziel should do the right thing and confess any and all violations of NCAA rules. Come clean. Deal with the consequences.

Look on the bright side–while he’s sitting out the coming football season, he’ll have plenty of time to polish those new rims.

And while you’re at it, Johnny, you should follow Reggie Bush’s example and give back that Heisman trophy. It’s becoming increasingly clear you didn’t deserve it.

UPDATE: Manziel’s attorney released a statement claiming that no official NCAA investigation is yet underway–contrary to earlier reports. However, ESPN does report that the NCAA’s assistant director of enforcement has made calls to the autograph broker who allegedly paid Manziel and “at least one person associated with the signings.”