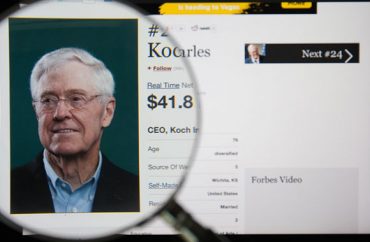 Higher Education Quarterly published a study on October 25 that claimed to show right-wing funding is pressuring university faculty to promote right-wing causes in hiring and academics at the expense of “people and ideas they regard as superior.”

It was soon discovered to be a hoax.

The faux study, “Donor money and the academy: Perceptions of undue donor pressure in political science, economics, and philosophy,” was retracted by journal editors Dec. 2.

“We intended to demonstrate that it is possible to publish a bullshit paper, with an obviously bullshit regression model and statistics that make no sense to any competent social scientist, in a good journal provided the paper supported a position people believe to be true,” the study’s anonymous co-author told The College Fix in an email.

“We also wanted to demonstrate that many people would read the paper and believe it despite it being obvious bullshit.” 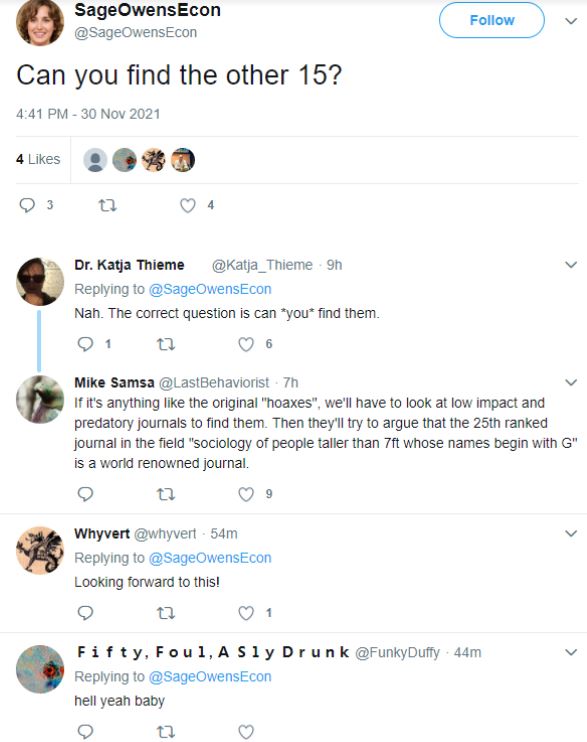 The authors have declined to reveal their identity thus far. Meanwhile, they have suggested there are more than a dozen additional published hoax papers out there yet to be discovered.

A representative of the Wiley Newsroom told The College Fix via email that “Higher Education Quarterly takes research integrity incredibly seriously and has since retracted the article given that the data has been identified as fabricated and the authors have not disclosed their true identities.”

Among the first to recognize it as a hoax was scholar Steven Hayward, who noted in Powerline on Nov. 29 that the two authors claiming to be economics professors at UCLA, Sage Owens and Kal Avers-Lynde III, have no record of existence.

Together, the authors’ initials spell out “SOKAL III,” a reference to the 1996 hoax study published in Social Text by New York University physics Professor Alan Sokal.

Hayward notes that the foundations these authors cite as donors cannot be accurate. The Randy Eller Foundation, he pointed out, has no record of existence or sourcing within the study itself. Of the other foundations, the Federalist Society does not fund undergraduate programs, and the Olin Foundation shut down in 2006.

The Twitter handle @SageOwnesEcon has been promoting the study since early November and using hashtags like “#UnKochEducation” to find readers. The original account bio read: “Labor and public economist. Mom. Activist. On Leave 2021-2022.”

After Hayward and others noticed the hoax, it was later changed to “exposing statistical innumeracy and fraudulent academic fields since at least 2021.”

Publishing nonsense is possible, provided it supports ‘a position people believe to be true’

To find out the purpose of the hoax, The College Fix emailed the anonymous author, operating under the name Sage Owens, at the email address listed on the study.

“Many left-wing faculty and the UnKoch Everything people fell for it, but a conservative law professor noticed the errors immediately,” the author told The College Fix.

According to the author, fabricated data was not the only issue with the study:

“This paper did not merely have fabricated data. (No one asked to see the raw data during the review process, and so we did not even create fake data),” the author said. “Instead, it has a regression model that is written incorrectly and is not even the right kind of model for the work the paper purports to do. Further, the data tables make no sense and are formatted with obvious errors, obvious to anyone competent in econometrics at least.”

Speaking to The Chronicle of Higher Education, the author said that the full hoax would be revealed later and told readers to “look for other fake papers.”

On November 30, @SageOwensEcon posted this question on Twitter, “Can you find the other 15?”

Prior to being suspended, the account also posted on December 2 the paper was “a test” and that the journal editor should resign. 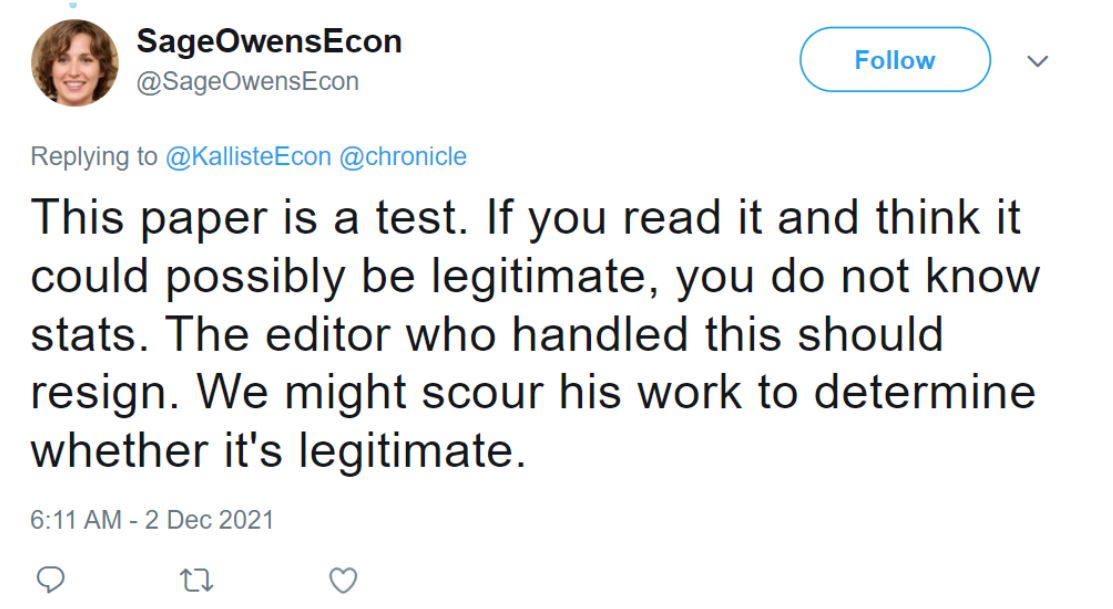 Some have questioned the effectiveness of these kinds of hoaxes, as Jonathan Barlett did in Mind Matters, writing “it is not the job of an editor or reviewer to catch falsified data,” suggesting the reviewer’s job is to catch wrong reasoning.

While the Sokal hoaxes attempt to discredit social sciences journals, he argues the process is “unscientific.”

“In order to show that the social science journals they targeted are more problematic than science journals, they would have needed a control group,” Bartlett writes. “Note that none of the Sokal hoaxers tried submitting nonsense to a science journal.”

Bartlett argues that science journals should be tested too, given that they have been known to publish trendy topics “no matter how bad the science content” and will “sometimes retract legitimate papers which have been properly reviewed simply because the topic is out of favor.”

But with more hoax papers promised — potentially up to 15 — the Higher Education Quarterly incident appears to be part of a bigger plan.

When it comes to peer review, the hoax author told the Chronicle that editors should protect against “nonsense.”