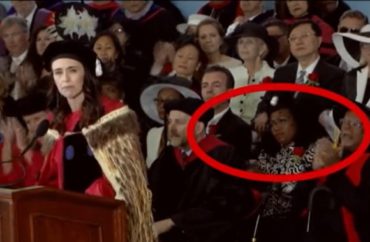 Judge Ketanji Jackson will join the court for the next term

Judge Ketanji Jackson, who will take a seat on the Supreme Court at the end of the June term, clapped in support of a gun ban during a recent graduation ceremony.

Jackson can be seen behind New Zealand Prime Minister Jacinda Ardern during the May 26 commencement ceremony at Harvard University. Ardern listed a number of liberal political victories the country had achieved, such as action on climate change and LGBT agenda items.

She included “banning military-style, semi-automatics and assault rifles,” as another victory, to a round of applause from the graduation attendees and Jackson.

The ceremony happened just two days after a deadly shooting at a public school in Uvalde, Texas that renewed calls for restrictions on the sale of firearms.

“I am sick and tired of it. We have to act. And don’t tell me we can’t have an impact on this carnage.

“I spent my career as a senator and as Vice President working to pass commonsense gun laws,” he said on May 24. “We can’t and won’t prevent every tragedy.”

Any executive action or law passed by Congress that restricted the sale or ownership of guns could potentially end up in front of the Supreme Court.