A Title IX adjudicator’s alleged view that men “will always enjoy sexual contact,” even when they don’t consent to it, has doomed Marymount University’s attempt to get out of a lawsuit filed by a male student it suspended for two years.

A federal judge denied the motion to dismiss by the Catholic university in Virginia (below), citing credible evidence that the professor who judged the Title IX proceeding was biased against male students including “John Doe.”

Judge T.S. Ellis also said Doe has made enough serious allegations about gender bias in the proceeding that his Title IX “erroneous outcome” claim can’t be dismissed at this stage.

The pseudonymous student faced one big hurdle going into the lawsuit. The precedents of the 4th U.S. Circuit Court of Appeals, which are binding on the Alexandria trial court, likely require Doe’s allegations to lay out more than the “sheer possibility” that Marymount’s actions against him were “unlawful.”

That’s a higher Title IX standard than the one in use in the 2nd Circuit, which only requires accused students to allege facts showing a “minimal plausible inference” of discrimination. 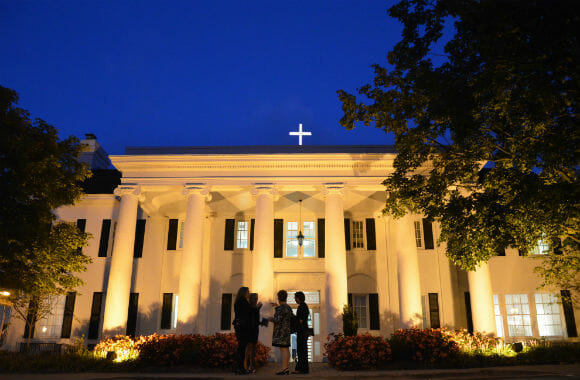 According to Doe’s claims, he met “Jane Roe” in November 2014 in his dorm room, where the pair chatted for 20 minutes while Doe’s roommate was present. After Doe’s roommate left, the pair began to “make out” and “fondle each other.”

Doe maintains that the two never touched each other’s genitals and Roe left after 30 minutes, saying she wanted to visit some other friends.

The recounting by Judge Ellis says Doe blocked the door in a “playful effort to persuade Roe not to leave” but did not “forcefully restrain her from leaving.” She then kissed Doe on the cheek and left, in Doe’s telling.

A week later, Roe texted Doe that he had “scared her” with his behavior, but added that she thought he was a “really nice guy.” Doe apologized for frightening her and wished her a good weekend.

Ten months later, Roe filed a complaint with university officials claiming that Doe had physically and sexually assaulted her.

One of the two investigators, Bernadette Costello, refused to let Doe consult with his attorney while the investigators were interviewing him, but eventually relented and gave Doe two minutes with his lawyer.

Roe made specific factual claims about Doe physically assaulting her: holding her down “by force” and trying to remove her clothes; performing oral sex on her, at which point she “knee[d] him in the face”; and reaching his fist inside her vagina while she was standing to prevent her from leaving the room. She claimed that Doe only let her go after she “grabbed and yanked his penis.”

Doe showed investigators that the timestamps on Roe’s friendly texts to him came after the alleged assault, not before as she had claimed. Roe’s own roommate told investigators that she said she wanted to “climb” him “like a [expletive] tree” and that Roe came back to their room that night “happy and giddy.”

Roe bragged about Doe, saying he was “good with his tongue,” according to the roommate, who further shared that Roe was “good at making herself seem like a victim” and often “bent the truth.” Another female student who saw Roe that night corroborated that she was showing off the “hickeys” Doe gave her, as told in the summary by Judge Ellis.

Marymount drafted three investigative reports, making changes in response to complaints from Doe and his lawyer, who were never allowed to keep a copy or even take “verbatim notes” from the report, according to Ellis.

The final version still included “irrelevant” information that Doe and his lawyer had previously flagged, including that Doe said he didn’t know any rape victims. It also took Roe’s factual claims at face value – such as Doe putting his fist in her vagina and Roe visiting a counselor “immediately” after the incident – and “failed to mention the absence of such evidence.”

Business Prof. Donald Lavanty used this final version to determine that Doe had violated the code of student conduct regarding sexual assault. Doe claims he wasn’t allowed to meet with Lavanty in person, present exculpatory evidence or call witnesses.

Ellis ruled that Doe has many ways to “cast articulable doubt on the accuracy” of the sexual-assault finding, as required for his Title IX claim to proceed.

Such “procedural insufficiencies and irregularities” include bans on Doe calling witnesses, gathering exculpatory evidence and cross-examining Roe in some form, Ellis said: Though they “may appear insignificant in isolation, taken together they warrant concern that Doe was denied a full and fair hearing.”

In a footnote on this section, Ellis wrote that colleges must not deprive accused students “the investigative and adjudicative tools necessary to clear their names even when there are no due process requirements.” Colleges must treat sexual allegations “with a degree of caution commensurate with the serious consequences” that follow a guilty finding, or else they “may well run afoul of Title IX.”

The judge also cited Doe’s claims that Roe’s “inconsistent and incredible statements” were contradicted by witnesses or not backed by any evidence, such as the “physically impossible” act of putting his “entire fist” in her vagina while she was standing.

“Importantly, Doe claims that significant facts were either not brought to the adjudicator’s attention or were ignored by the adjudicator,” Ellis wrote.

Ellis zeroed in on Lavanty’s alleged statements that suggest he holds “certain gendered beliefs,” due to another sexual assault case that Lavanty adjudicated.

That case involved a male student accusing a female student of grabbing his genitals without consent, as well as pushing his hand onto her genitals. Lavanty had allegedly asked the accusing male student if he was “aroused” by the unwanted touching. The student responded in the negative, to which Lavanty asked, in apparent disbelief, “not at all?”

Ellis ruled that “this unpleasant exchange” in the course of Lavanty’s duties, if true, “reveals that Lavanty’s decision-making was infected with impermissible gender bias, namely Lavanty’s discriminatory view that males will always enjoy sexual contact even when that contact is not consensual.”

It wasn’t the only example of gender bias alleged by Doe. Ellis ticked off 10 more, including statements by Title IX officials that “most people” tell the truth about being sexually assaulted and “the Title IX process is increasingly politicized, especially in Virginia”:

This statement by [the deputy Title IX coordinator] appears to be an implicit acknowledgment that Marymount’s sexual assault policies and Title IX procedures were influenced, at least in part, by political pressure to convict respondents in sexual assault cases – respondents who are almost invariably male.

Other examples include: Marymount’s one-sided provision of review for accusers whose claims are found “without merit”; the final report’s inclusion of Roe’s alleged diary entries, which were provided to investigators a month after she mentioned them; the investigative team’s “refusal to make any effort” to seek exculpatory evidence, such as witnesses who could verify Doe didn’t have marks on his face from Roe’s knee; and Marymount’s decision to accept Roe’s “purportedly implausible allegations” over the accounts of “neutral witnesses.”

Marymount and attorneys representing Doe declined requests for comment from The College Fix, both citing policies of not commenting on ongoing litigation.