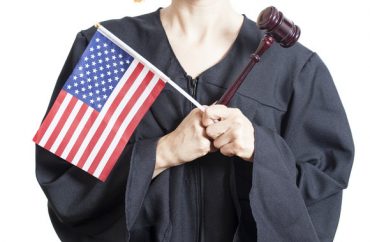 WASHINGTON – There are two Constitutions, and our future as a country largely depends on which one we follow, according to Georgetown Law Prof. Randy Barnett.

The architect of the legal challenge to the Affordable Care Act talked about his new book, Our Republican Constitution, at a Cato Institute event last week.

He explained why there was such an outcry against unchecked democracy at the Constitutional Convention of 1787: The more democratic states had approved ill-conceived laws, among them debt-relief measures demanded by the sizable debtor class (remind you of college grads?) that were wreaking havoc on the credit market. Conservatives are still arguing today about which Constitution they prefer, Barnett said:

the democratic version under which “the people” can do practically anything as a majority bloc, and “judicial restraint” is the mantra

the republican version under which the Constitution as written is vigorously followed, even when it frustrates popular majorities

Barnett’s critic on the dais, University of Maryland Law Prof. Robert Percival, told the audience that Barnett was setting up a “false dichotomy” in his conception of two Constitutions.

The republican Constitution favored by Barnett is a “recipe for tremendous litigation” by individuals who could challenge a wide range of laws that don’t “trample too much on individual rights,” said Percival, whose specialty is environmental law.

The U.S. Constitution has survived precisely because of its capacity to change over time, Percival said: Barnett’s preferred doctrine would erode the court’s reputation and make it seem more partisan.

What is the relevance of this think-tank discussion, however intellectually stimulating, to our work at The College Fix?

It’s a perfect big-picture stepback from the threats to individual rights on college campuses in response to changing popular attitudes on issues such as discrimination, sexual harassment and so-called safe spaces.

“Judicial restraint” is emerging as the unstated mantra of both the regulatory agencies that are clamping down on students’ individual rights, and the activists who want to shred basic fairness and due process for unfavored groups.

They are basically arguing that old-fashioned judges – who believe the Constitution means what it says – need to get with the times. Otherwise they are just hidebound ideologues and partisans.

Consider the Justice Department’s recent “findings letter” to the University of New Mexico regarding its sexual-harassment policy. As the Foundation for Individual Rights in Education notes, the executive branch is explicitly contradicting the judicial branch on what speech counts as unprotected harassment:

DOJ flatly declared that “[u]nwelcome conduct of a sexual nature”—including “verbal conduct”—is sexual harassment “regardless of whether it causes a hostile environment or is quid pro quo.”

To comply with Title IX, DOJ states that a college or university “carries the responsibility to investigate” all speech of a sexual nature that someone subjectively finds unwelcome, even if that speech is protected by the First Amendment or an institution’s promises of free speech. …

The shockingly broad conception of sexual harassment mandated by DOJ all but guarantees that colleges and universities nationwide will subject students and faculty to months-long investigations—or worse—for protected speech. This is not only blatantly unconstitutional, as decades of legal precedent make clear, but the effects are entirely foreseeable, because so many colleges have already cracked down on a broad range of speech that is not remotely “sexual harassment,” all because of dubious guidance the feds have already issued. (See Kipnis, “I hit it first,” the free-speech penis…)

As FIRE notes in another post, it’s rich that Justice faulted the university for having conflicting sexual-misconduct policies, considering the agency’s own “unwelcome conduct” standard is so vague and arbitrary and chilling as to be unconstitutional on its face.

It’s not just agencies like Justice and the Department of Education’s Office for Civil Rights (OCR), which has been using its unenforceable guidance to threaten colleges for five years, that are preaching judicial restraint.

It’s also demagogues in Congress. The Campus Accountability and Safety Act, recently reintroduced in the Senate, continues its assault on the legal system, as Ashe Schow of the Washington Examiner wrote.

It would codify a Bizarro Adjudication World in which

law enforcement is trained to coach accusers and impede the accused

schools that don’t send up accused students like lambs to the slaughter are hit with statutory penalties, not just OCR’s as-yet executed funding threats

As Schow notes, this bill – as terrifying and lawless as anything justified by the War on Terror – could get through Congress when no one is looking:

There are rumors that if CASA can’t get passed on its own, lead sponsor Sen. Kirsten Gillibrand, D-N.Y., will attempt to have it included in the Higher Education Reauthorization Act — perhaps making it easier to pass, as congressmen often don’t read big bills. That would be dangerous for college campuses, even worse than current policies. Judges have already put up significant hurdles to accused students who were shafted by their schools, giving them a pittance in settlements and damages when they win compared to the hefty sums that schools have been required to pay accusers who file Title IX suits.

That has started to change with big due-process wins for students at Brandeis, Washington and Lee and the University of Southern California, among others.

But Gillibrand – the Tokyo Rose of Rape Culture – and her allies are determined to ensure that new federal judges with lifetime appointments are co-religionists who Believe the Survivor and give schools a free pass on whatever Star Chambers they develop to satisfy gangster regulators like Catherine Lhamon.

They did it with Jesse Furman, a President Obama-appointed judge who threw out a lawsuit by an accused student against Columbia University by downplaying massive evidence in his favor. Being accused of a crime and deprived of proper treatment under the law is just an educational experience, right?

More Furmans are surely coming down the pike as long as Gillibrand and her affirmative-consent cohort are calling the shots.

Defenders of the Constitution as it is, not as they hallucinate it, can’t simply rely on a couple Republican senators and a riled-up Georgia lawmaker to fight the good fight.

It’s time to recruit allies for a full-frontal assault on “judicial restraint,” the mantra of lawless prosecutors and mobs. (It’s no coincidence that ex-prosecutor Sen. Claire McCaskill, D-Mo., started the charge.)

We must demand that judges don’t shirk their duties when presented with core constitutional questions, simply because the parties are college students and OCR is breathing down the necks of cowardly college presidents.

An entire generation of college men – gay, straight, bisexual, black, Asian and more – is on the line.