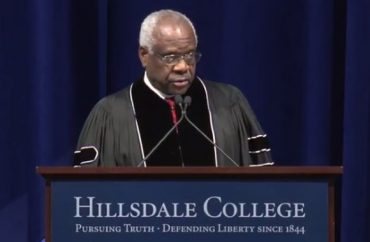 ‘Sadly, today it seems as though grievances rather than personal conduct are the means of elevation’

Supreme Court Justice Clarence Thomas on Saturday warned the class of 2016 in his commencement address at Hillsdale College that the rising tide of social justice demands run afoul of this nation’s founding principles and urged grads to prioritize hard work, civic duty and personal responsibility.

“As you go through life, try to be that person that teaches others how to be better people and better citizens,” Thomas said. “Do not hide your faith and your beliefs under a bushel basket, especially in this world that seems to have gone bad with political correctness.”

He told graduates he would not call on them to fight societal injustice and change the world. Instead, he urged them to practice good citizenship, which ultimately preserves freedom.

“Having been where you all are, I think it is hard enough to solve your own problems, not to mention those problems that often seem to defy solution,” Thomas said.

Thomas also honored his former colleague of 25 years — the late Justice Antonin Scalia, who died in February — saying they had “made the Court a better place for each other.”

“This has been a most difficult time on the court,” Thomas said. “When I think of Justice Scalia, I think of the good man I instinctively could trust during my first days on the court — and those were challenging days. He was, in the tradition of the South of my youth, a man of his word, a man of character.”

The 67-year-old jurist, in his speech to the 353 graduates at Hillsdale’s 164th commencement ceremony, contrasted the values demonstrated by his family and community during his youth in Savannah, Georgia, against those seen in modern-day America.

“At risk of understating what is necessary to preserve liberty in our form of government, I think more and more it depends on good citizens discharging their daily duties and obligations,” Thomas said. “Sadly, today it seems as though grievances rather than personal conduct are the means of elevation.”

Thomas referenced the idea of grade-point average redistribution, which would take points from a hardworking, high-achieving student to that of a low-achieving one.

“Apparently, we all deserve the same reward, the same status notwithstanding the difference in our efforts or our abilities,” Thomas said. “It is no wonder, then, that we hear of what is deserved or what one is entitled to.”

The justice emphasized lessons he learned from his grandfather.

“He knew that though not nearly perfect, our constitutional principles were perfectible if we worked to protect them rather than to undermine them,” Thomas said.

“But even though this liberty is inherent, it is neither guaranteed nor assured,” Thomas said. “It was secured by the lives, fortunes, and sacred honor of those who dared to exert that liberty.”

He recounted instances in his own life when people’s acts demonstrated what it meant to fulfill the duties they had to each other, such as a librarian bringing books to him to read on the farm where he grew up, and his neighbors helping to collect crops in the field before the arrival of a storm.

Practicing those values, he said, will benefit America.