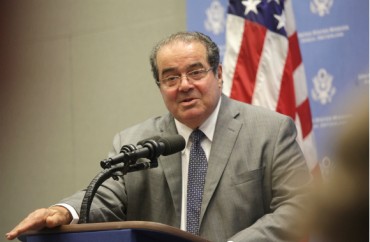 The Supreme Court’s most sarcastic justice couldn’t convince most of his colleagues that the U.S. Constitution does not require same-sex marriage, but he’s allegedly influential with an unexpected group: law students.

Erwin Chemerinsky, dean of the University of California-Irvine’s law school, is speaking out against the allure of Scalia’s writing style to his own students.

While Scalia has “long relied on ridicule,” the justice took it to a new level this term with “especially nasty, sarcastic and personal” opinions, Chemerinsky wrote. Referring to Scalia’s critique of the majority opinion in the Obergefell same-sex marriage case, the law dean said: “A litigator who compared an opponent’s brief to a fortune cookie likely would be, and should be, sanctioned by the court.”

The dean may have himself to blame: Chemerinsky told The Fix he is assigning Scalia’s dissents in class.

Another possibility is that Chemerinsky is out of touch with youth culture.

Rick Garnett, a law professor at Notre Dame, told The Fix in an email that writing on social media already takes an ironic, sarcastic and even nasty tone, and students are accustomed to such language.

“I would imagine Dean Chemerinsky would agree that it would be a good thing if more lawyers could write with Justice Scalia’s skill, even if that meant tolerating a bit of sarcasm,” said Garnett, a contributor to the Catholic legal theory blog Mirror of Justice.

Chemerinsky got pushback from another professor, whose letter to the editor of the Times said many students “have for years already seen much more such tone and style [as Scalia’s] in the political rhetoric of their campuses.”

Stephen Ball, a philosophy professor at California Polytechnic State University, wrote that he had “definitely seen this trend” in his 35 years of teaching in California universities.

Some law students may also find Scalia’s “substantive positions” attractive and develop their own cynicism “about the apparent politics of the nation’s highest court,” such as Chief Justice John Roberts’ alleged inconsistencies, Ball said.

The “pungency” of Scalia’s writing is precisely what makes him “the Supreme Court’s greatest writer,” according to Jeet Heer, senior editor at The New Republic.

Scalia is “the foremost living practitioner of performative legal prose, a masterful writer who can make torts tarty and judgments jazzy,” Heer wrote.

Comparing Scalia to writers including T.S. Eliot and Marcel Proust, Heer said “his puissant language is powered by a terrible sense of longing, a palpable feeling for the world we have lost.”