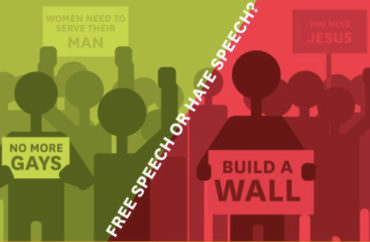 Campus office that created the poster is mum

A Christian student leader is demanding an apology after a poster distributed by Kent State University asked if stating “You need Jesus“ could qualify as hate speech.

The public university’s Center for Student Involvement created and circulated the poster on Twitter last week. It was designed to promote an event on free speech issues as part of Kent State’s KENTTalks, which are intended to “provide a safe place for discussions and transformational experiences for our student body” and promote “civil discourse.”

Silhouetted activists on the posters hold a range of placards with messages, overlaid with the rhetorical question “free speech or hate speech?” Alongside provocative expressions including “No More Gays,” “Women Need To Serve Their Man” and “Build a Wall,” the fourth placard bears a nonviolent, basic expression of the Christian faith: “You need Jesus.”

Jared Small, president of the Campus Ministry International student organization, told The College Fix that the poster was inappropriate.

“The university should apologize because it appears to be targeted toward one political and religious side,” he wrote in an email:

Small later clarified he was speaking personally, not for his organization.

She told The Fix in an email that she had no involvement in creating the poster for the event: The Center for Student Involvement “created all of the promotional materials … I’m not sure what the process is/was.”

Neither Eric Mansfield nor Emily Vincent, the executive director and director of Kent State media relations, responded to repeated Fix queries. Neither did Kristan Dolan nor Rick Danals, assistant director and assistant dean of the Center for Student Involvement.

‘Nobody wants to be told “You’re going to hell”‘

Jacob Brown, president of the Catholic Student Association, implied the posters were likely to refer to the hellfire preachers who visit campus “twice or so each year.”

“Do I think it constitutes hate speech? No. Should the university apologize? No,” he told The Fix in an email.

“Nobody wants to be told ‘You’re going to hell,’” Brown said. “As a ​leader of a religious student organization​, I put my face in my palm every time I see this [religious] protest,” which echoes the “zealousness” of Jesus in challenging the money changers in the temple but also comes across as “tasteless and without empathy.”

Brown urged students to understand the intentions of the protesting preachers, even if their message delivery is controversial. “They share this with you because they believe it is in your best interest,” he said. “I feel few students stop to consider this perspective.”

Christian students should also welcome the challenge of responding to those who accuse them of hate speech, because “a person’s convictions are useless in a vacuum,” Brown continued. “Sharing your ideas with those who agree with you isn’t testing validity, it’s just increasing popularity. … Embrace the trial by fire.”

Notably absent from the potential hate-speech slogans on the poster is a prominent example from Kent State’s recent history.

In 2011, an associate professor of history, Julio Cesar Pino, drew condemnation from campus leaders, students and faculty when he shouted “Death to Israel” at a Muslim Israeli diplomat of Bedouin heritage, Ismael Khaldi, who was speaking on campus.

Colin Cortbus is a university student in the United Kingdom.

CLARIFICATION: Jared Small later clarified to The Fix that he was not speaking for his organization. The article has been amended accordingly.