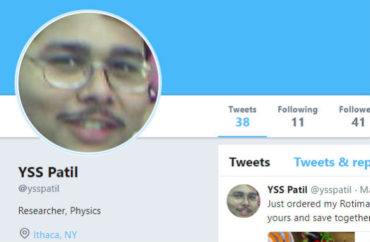 If anyone committed ‘retaliation,’ it’s his accuser

This spring, 23 Cornell law professors – a third of the law faculty – went to court against the university for repeatedly failing to follow its own Title IX procedures.

They were provoked by Cornell’s failure to give an accused student a right explicitly granted him in its policies – indirect cross-examination of his accuser.

Now 19 law professors are ganging up on Cornell for ignoring its own policy in response to a Title IX retaliation claim.

They denounced the university’s decision to withhold a student’s doctorate three days before his graduation for allegedly defending his professor against a female student’s accusations.

Yogesh Patil’s adviser Mutund Vengalattore was denied tenure based on a dubious rape allegation that was made by a physics student after the tenure committee brushed aside minor complaints against Vengalattore.

The professor’s accuser “LA,” identified by defense attorney Scott Greenfield as Lauren Aycock, then accused Patil of creating a website that tells Vengalattore’s side of the story and includes reams of court documents. (Vengalattore lost his legal battle against Cornell.)

According to Aycock, this alleged behavior by Patil (who has steadfastly denied any role in the website) counts as prohibited retaliation in response to her report against Vengalattore.

MORE: Patil could be expelled for defending Vengalattore

In a June 3 letter written by law professor Kevin Clermont and signed by 18 colleagues, made public by The Cornell Daily Sun this week, the law professors tell President Martha Pollack and Cornell legal and Title IX officials that Cornell was risking “disastrous publicity” and “substantial legal liability” for withholding Patil’s Ph.D.

The “complainant” (Aycock) falsely claimed the materials on the website defending Vengalattore come from a Cornell investigation under its controversial Policy 6.4, which governs sexual-misconduct cases, according to the letter.

In fact, the content comes from “publicly available documents from the professor’s tenure litigation,” and the website doesn’t identify the accuser or include any confidential documents, Clermont wrote.

v3 by Girsha Arora on Scribd

But Cornell’s most glaring failure is ignoring the language in its policy on retaliation, the professors claim. It’s more likely that the complainant violated the retaliation policy by accusing Patil:

All the website did was publicly discuss a case of immense academic importance. Yogesh’s [alleged] involvement comprised only “good faith actions” [which are exempted from “retaliation”] to question Cornell’s treatment of his professor and to pursue his own professional self-interest so impacted by Cornell’s actions against his lab [which is run by Vengalattore]. Restrained speech of this sort should not be deemed suppressible by a university. …

The circumstances of [the complainant’s] new complaint are suspicious: After waiting months or years, she filed on May 23, 2018. Yogesh’s parents and brother were en route from India and Australia to see him graduate. At the last moment, he learned that Cornell, without investigation, was automatically withholding his degree in response to her mere filing of the complaint. Indeed, there is the injustice: the automatic withholding of a degree based on a complainant’s say-so. …

In brief, Cornell’s treatment of Yogesh is disturbing. If Yogesh is guilty of retaliation, then so is anyone who discusses Title IX proceedings at Cornell even without identifying details.

Clermont told the Sun he didn’t know about further developments in the investigation against Patil, who is crowdfunding his defense.

The administration responded without addressing any of the claims in the letter. According to the Sun, President Pollack’s special counsel Kelly Cunningham told Clermont that “the matter in question is being handled expeditiously and fairly, consistent with our published policies and procedures.”