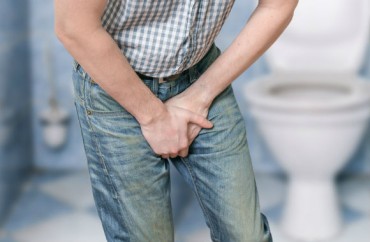 George Washington University has made numerous restrooms gender-neutral, but none could be interpreted as multi-use – until now.

A one-stall, three-urinal men’s restroom near the law school’s Moot Court room has been designated “all-gender.” The only physical change was the addition of two locks, one of them handicap-accessible.

While the school maintains that one person at a time should use the restroom and lock the door, one of its own law professors is fighting back with a guerrilla-marketing campaign, urging students to not act like “irrational prudes” by locking the door.

Administration: ‘We expect’ people to lock the door

The men’s room was converted in December so the first floor of the law school building would have an all-gender restroom, joining three other unisex rooms elsewhere in the law school, spokesperson Liz Field told The College Fix in an email.

Though she said the converted restroom “is intended to serve as a one person restroom despite the urinals contained therein,” Field stopped short of saying that students could be punished if they left the door unlocked – say, because someone else walked in and perceived the intentional unlocking as sexual harassment. It was converted for those who wish to relieve themselves “alone should they wish,” she said.

“We expect individuals to go in and lock the door behind them. It is not intended for multiple use and for the last two-plus months all individuals have used it as it is intended,” Field said.

No one has made any complaints and there has been “no student reaction,” she claimed.

There has been faculty reaction, however.

The GW Hatchet, the university newspaper, has not yet reported on the converted men’s room either.

The school’s posted sign insisting that one person at a time use the restroom bothered Banzhaf so much he put up a competing sign with an implied legal threat directed specifically to men. “Please knock before you enter and lock the door behind you when you use this restroom,” the law school’s sign reads, while an adjacent sign gives directions to the nearest separate male and female restrooms.

Banzhaf’s lengthier sign, in block letters, reads in part: “While any person who is so shy – in this day and age when coed restrooms and showers are common in many dorms, and even kids think nothing of texting nude pictures of themselves – that they cannot stand to share a restroom with somebody not of their own gender, is free to lock the door, it is neither required nor desirable.

You won’t even know who’s in the stall

“I wouldn’t be surprised if mine were taken down,” the professor told The Fix in a phone interview.

He’d like to see more multi-use, all-gender bathrooms on campus to improve the efficient use of space, and he believes the law school’s converted men’s room is a good trial for the whole university.

Such restrooms could “someday” appear in more areas with freshmen, where “inappropriate” behavior is more likely, Banzhaf said. His class discussions on the converted men’s room have drawn a few privacy and security concerns, particularly from female students, Banzhaf said. But while women and people with shy-bladder syndrome may prefer the locked door, transgender students may feel left out if they approach an all-gender bathroom with the door locked, he added.

The professor thinks that the safety risk to women of sharing a restroom with men is overblown.

For one, he has “observed very few women wearing feminine shoes in law school,” suggesting that men in the all-gender restroom would not realize a woman was in the stall and use the opportunity to sexually assault her, Banzhaf said.

Banzhaf has already gone public in his war of words with the law school, telling a local news station he expects multiple people to use the restroom at the same time and calling it a boon to transgender students.