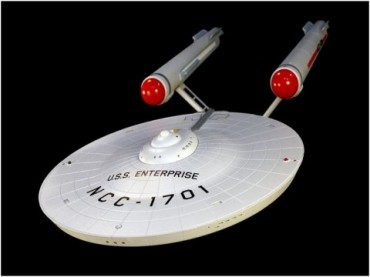 Meet Professor John Putman — he teaches “Star Trek, Culture, and History” at San Diego State University. As a life-long science fiction fan (including, natch, Star Trek), I was highly intrigued by the course’s content and syllabus.

Professor Putman graciously agreed to answer a few of my questions regarding the course … and Trek in general.

But first, here’s a little abbreviation guide to assist with what follows:

1. It is my understanding that SDSU has no US History course requirement for graduation. How do you feel about that? Should colleges have such a course mandate, or are courses like “Star Trek, Culture, and History” sufficient?

While SDSU does not have a specific requirement for US history, it does have an American Institutions requirement in which history is one, if not the, most popular choices to fulfill it. Usually a little more than 1000 students take either our Early American or Modern American survey history course each semester. In addition, all students are required to take a World or Western Civ history course as part of the General Ed requirements.

Perhaps it’s my bias but I do believe students should be required to take an US history lower-division course so that they are better informed citizens. The Star Trek course would not be sufficient since it only focused on post-WWII America. Moreover, most of the students who do take it are history majors.

2. How much US History is covered in your class, would you say? What events and/or people are covered? How in-depth does the course delve?

One-half of the course explores postwar US history. Each Tuesday I lecture on the issues and themes of that week and the Thursday class we watch a full episode of Star Trek that deals with that week’s theme. For example, in the first half of the course we focus on 1945-70 and explore history of US foreign policy (Cold War), race, religion, and gender/sexuality during this time period. We then look at how Star Trek: The Original Series reflected the attitudes or ideas of the 60s or offered social commentary on the particular issue. The second half of the course follows the same pattern, but focuses on 1970 to the early 2000s, looking at the same themes as well as a few others like terrorism, environmentalism, and politics/government. We the watch an episode from one of the more recent series (The Next Generation, Deep Space 9, Voyager, or Enterprise). Because of the time spent on Star Trek I don’t explore history in as much depth as I do in my regular US History since WWII course.

3. You mentioned in one article that in the original series’ Cold War analogy, the Federation was the United States, and the Klingons were the Russians. How has that changed/been modified (with the addition of the various spin-off series), if at all?

The more recent series or spin-offs are a little more sophisticated than the Original Series so the alien species generally don’t represent a single contemporary nation or nationality. Often they might be composites of a couple of other nationalities or groups, though at times viewers can see one predominate. The Klingons do seem to still largely represent the Russians, though the post-Cold War Russia not the Soviets. For the most part, the recent series use the various alien species to explore larger traits or attitudes and not so much nation states.

(My personal view on this is that the contemporary geopolitical situation would appear thusly in the 24th century: The West=The Federation, the Islamist Middle East=The Klingons, Russia=The Cardassians, and China=The Romulans. This, notwithstanding that the “rebooted” 2009 Star Trek film established that Romulus was annihilated by an exploding star.)

First, we have to remember that the Star Trek series more often than not reflect the concerns, issues, values, and anxieties of the time period during which the series ran. Only a few episodes actually use the more distant past. There are numerous episodes that are useful to help my students understand aspects of postwar America. The Original Series was a little more direct than the other series. Just to name a few: TOS’s “Errand of Mercy” on the Cold War; TOS’s “A Private Little War” on Vietnam War, TOS’s “The Way to Eden” on the hippies/counterculture; TNG’s “The High Ground” on terrorism; DS9’s “In the Hands of the Prophets” and ENT’s “Chosen Realm” on religious extremism; DS9’s “In the Pale Moonlight” on maintaining values during time of war, ENT’s “Demons” on xenophobia, VOY’s “Lineage” on genetic engineering.

5. Which Trek episodes best deal with issues of race, gender, and [non-hetero]sexuality?

For race, TOS’s “Let That Be Your Last Battlefield” is a classic, TNG’s “The Chase” and “The Measure of Man,” DS9’s “Badda Bing, Badda Bong” and “Far Beyond the Stars.” For gender and sexuality, TOS’s “Turnabout Intruder,” TNG’s “Angel One,” “The Perfect Mate,” and “The Outcast,” DS9’s “Rejoined,” and ENT’s “Cogenitor” 6. Do you think the Trek future history timeline is even plausible, especially noting the years just prior to, and immediately after, the first warp flight?

I doubt it. Let’s not forget it is fiction. Yet it does provide us some inspiration to progress and move forward. Clearly, to travel space like they did in Star Trek we will need to design some way of travel like warp speed to overcome the great distances.

(I recommend checking out the excellent book Federation: The First 150 Years to see the explanation(s) of how humanity managed to create a warp vessel in the midst of global — nuclear — conflict.)

7. What is the best Trek series and why?

This is a loaded question and always produces passionate debate among Trekkies. Most choose either TOS or TNG, however, I believe the best is Deep Space Nine. I say this in terms of the range and depth of episodes. DS9 is helped by its darker feel and view that allows them to explore the complexity of issues and ideas. Also, since it is largely a stationary place which doesn’t travel from planet to planet it allowed and encouraged more character development than the other series which always had to spend time introducing a new planet or species.

8. What is the worst Trek series and why?

Frankly, I like them all and for different reasons. I would say most fans would like target Enterprise and I understand why they would do this. Some objected to a series set before the TOS crew and others felt that Captain Archer and the many episodes revealed a less friendly more aggressive Earth. Some have suggested that Enterprise reflected the more aggressive and imperialistic ideas of neo-conservatism that reign after 9/11. So, I will punt on this question. As they say it is like asking a parent which child they like the most or the least.

9. What is your opinion of the Trek “reboot” films?

I have no problem with the reboot films. First, they reinvigorated the Star Trek franchise and opened it up to a much wider audience. Anything that promotes Star Trek deserves some credit. No doubt my own course has benefited from the renewed interest in Trek. My only criticism which is somewhat unfair is that the depth of the story lines has been sacrificed to the need for explosions and fight scenes to attract a wider audience. The 2009 film had the duty of introducing the characters so that explains its lack of meaningful message. The 2013 film did at least touch on terrorism and genetic engineering, yet lacked any real insight or depth. The hope is that the next film will also leave earth and explore the far reaches of space and include stronger social and political commentary.

10. What are your top five Trek episodes (any series)?

(For what it’s worth my faves from each series are TOS’s “The City on the Edge of Forever,” TNG’s “The Inner Light,” DS9’s “Far Beyond the Stars,” VOY’s “Future’s End,” and ENT’s “In a Mirror, Darkly.”