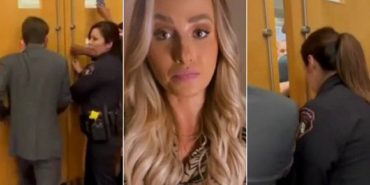 Progressive protesters at the University of New Mexico shut down an appearance by Fox News pundit Tomi Lahren on September 15 resulting in the commentator and her father being sequestered until police arrived.

According to OutKick.com, the “organized hate group” allegedly was coordinated by “Political Fireball” on social media by posting an image which read “FUCK WHITE SUPREMACY — Rally Against Tomi Lahren’s Speech at UNM — We Won’t Allow Racist Rhetoric to be Spread on Our Campus Unopposed.”

The protesters “broke into the auditorium to chant ‘F**k Tomi Lahren'” before the pundit even had a chance to speak. As the activists “banged on the door” Lahren, her father and a Turning Point USA representative had to lock themselves in a “back room” until local police arrived to support the campus cops already on scene.

Lahren also is a host at OutKick.

Where is the FBI? I thought they were committed to tracking down and bringing DVEs to justice? pic.twitter.com/Bg3rfQTmjH

We kicked @TomiLahren out of @UNM campus and it took less than an hour of disruption. It's our duty to shut down white supremacist organizing every chance we get.

“We had a couple of campus PD officers. That was it,” Lahren said. “They did not call Albuquerque police. They didn’t call the New Mexico police. They were completely unprepared and quite frankly, didn’t care. Even after we were in the room, and these protesters that were let into the student union and were banging on the door trying to bust in the door to attack me and the speech goers — the university still did nothing.”

Lahren told Fox News Digital she “would not have gotten out of there” if additional law enforcement had not shown up.

From the Fox News story:

[Lahren] said the students caused mayhem and even pulled fire alarms, but she doesn’t believe any arrests were made. The University of New Mexico Police Department did not immediately respond to a request for comment.

The University of New Mexico insists students will be held accountable for their actions.

“The University of New Mexico is committed to the principles of free speech and values its role as a public square for debate, a marketplace of ideas, and a place to test and challenge competing viewpoints and opinions. In this context, allowing speakers invited by a student organization on campus in no way implies an endorsement of the content of their speeches or their opinions. And those who disagree with the ideas expressed are encouraged to respectfully voice their perspectives,” University of New Mexico spokesperson Cinnamon Blair told Fox News Digital.

“The safety of our campus community and visitors is our first priority. We are deeply disappointed in the actions of those individuals who intentionally chose to disrupt a scheduled speaker and infringed upon the rights of the speaker and those who attended the event to listen and engage, vandalized University property and unlawfully pulled a fire alarm,” Blair continued. “UNM is investigating these incidents and will hold anyone who violated the law or University policies accountable.”

Lahren said she won’t let the UNM incident deter her from going to other campuses: “This happening has actually inspired me to do more campuses, because we cannot allow them to intimidate us and back us into a corner, into the silence.”

A Google and social media search of Facebook and Twitter did not show any results for “Political Fireball” other than, ironically, a conservative New Mexico blog — which did not cover the Lahren incident.

MORE: The intolerance of free speech in higher education