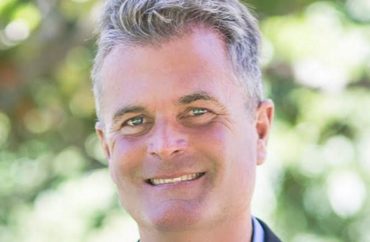 But scholar stands firm: ‘I have zero regrets for speaking out’

Professor of French Brian Kennelly doesn’t fit the usual profile of a professor targeted for attack by liberal campus activists. He is gay and an immigrant — typically two protected classes among campus progressives.

But when Milo Yiannopoulos was invited by the College Republicans to come to Cal Poly San Luis Obispo last year, activists at the school turned their ire on Kennelly, the club’s faculty advisor at the central California campus.

Fliers appeared on campus with a picture of Kennelly, his contact information, and the words: “I am also bringing the white supremacist Nazi, Milo Yiannopoulos to campus.”

Accusations flew. Hatred spewed. It was the wrong target, said Katherine Rueckert, former president of the College Republicans. Kennelly supported the club’s right to invite him, it wasn’t his idea to bring him to campus, she said. When campus activists pressured the professor to use his position as faculty advisor to rescind the invitation, Kennelly stood firm. 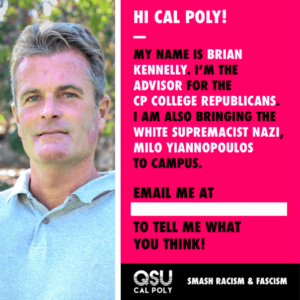 Kennelly sums up the situation matter-of-factly: “Because I supported their decision, their right to invite him, I was the bad guy on campus.”

It not something he’s unfamiliar with, but in recent years it’s gotten worse.

“I would say that I work in a very hostile working environment as a result of [my beliefs],” he said. “I don’t think that it was ever as problematic as it seems to be until Milo Yiannopoulos was invited to campus.”

“From that moment on, doors slammed when I walked down the hall.”

No stranger to adversity

Originally born in apartheid-segregated South Africa, Kennelly paints the picture of an early life on the move. He and his parents moved to Texas when he was a toddler, until his father was drafted for the Vietnam War.

“He decided it was probably better to leave the United States at that time than be sacrificed on the Vietnam altar,” Kennelly said, adding his family moved back to South Africa where Kennelly spent the remainder of his childhood.

“As a white kid, I didn’t have it nearly as bad as non-white individuals,” Kennelly said. “But my parents realized that this was a dangerous country to raise a family.”

Not seeing a future in South Africa, Kennelly’s father, a cardiologist, wanted to bring his family back to the United States.

“Unlike what I suspect is happening today, he didn’t just bring his family to the United States and hope to god that we wouldn’t be separated at the border and that we would just be let in,” Kennelly said. “He went through a pretty intensive process in order to apply legally to bring us here.”

“As the son of someone who worked hard to bring his family to the USA legally from a country on the verge of civil war, I find your description of the current situation (“insanity”) simplistic and divisive–and not inclusive of the range of opinions on this issue,” he wrote, cc-ing his peers.

Kennelly, in his interview with The College Fix, recalled his father studying night after night to pass the exams he was required to pass in order to practice medicine in the United States. When they left South Africa, the South African government froze much of the family’s finances, but they were still able to arrive in America with enough to get by, settling down in Louisville, Kentucky.

Many of his father’s colleagues weren’t so lucky, though. Due to a quota system in place at the time, a large number of them ended up in Canada instead of the United States.

Initially, Kennelly planned on following in his father’s footsteps and studied science. But he soon discovered that he enjoyed French more, and ended up getting a research position after college.

Kennelly, now a professor of French, said his subject matter is not inherently political, but the professor acknowledged how much politics can pervade conversations on campus.

“I do my best not to intentionally talk about politics, but it comes up,” he said. “I realize that it can be divisive and problematic, so it’s important that I as an educator try to be as inclusive as possible.”

Although he does not identify as conservative (his beliefs are still a work in progress, he said), Kennelly’s extracurricular involvements have given him the stigma of being a politically oriented professor. His decision not to push the College Republicans to disinvite Milo exacerbated this image.

“I think my students, even if they were just studying French with me, are aware of controversies,” he said. “They probably perceived things that I said, or did, or approaches that I took in a way that may have been a misperception, and sort of through a distorted political lens.”

In one class evaluation, a student wrote an extensive review criticizing the perceived political nature of Kennelly’s class.

“I don’t intentionally politicize my classroom, but I can see how some people, all they can see in a person is his or her political affiliation,” Kennelly said.

Teaching used to be fun. It still is, but the divisiveness on campus has been tough, he said.

“It’s very different today, from my standpoint at least, to try to do the job that I have always enjoyed in the past,” he said.

Laura Freberg, a professor of psychology at Cal Poly, preceded Kennelly as faculty advisor for the College Republicans during what she describes as a simpler political time. She praised his performance as faculty advisor.

“You don’t always want the students to go in a particular direction, but that’s not our call,” she said, noting the focus of the advisor is on mentorship and facilitating what the students want to happen.

“I just think Brian’s done that brilliantly,” she said.

She spoke about how Milo’s invitation to campus turned Kennelly into a target.

“Social media and the internet has made it possible for a single person to rally the troops and come down on one person pretty hard,” she said. “I’m sorry that Brian has had that kind of experience.”

But the Milo fiasco only further aggravated how Kennelly’s colleagues treated him, which was already getting worse because of Donald Trump’s election, Kennelly said, adding only one colleague was willing to engage with him about political issues.

“We are diametrically opposed, politically, but we can at least have conversations that are respectful,” Kennelly said. “But most everybody else doesn’t have the time of day.”

‘I have zero regrets for speaking out’

Kennelly said he was the first president of the LGBTQIA Faculty/Staff Association. But he struggled in the position of president due to the intolerance of many of the group’s members. There was a reluctance to engage with any ideals that came close to conservative ones, he said.

“I no longer have anything to do with that group because it’s so un-inclusive even though it claims to be the opposite,” he said. “It’s really hard being labeled and reduced as a result of one’s political beliefs. Individuals who are not open about where they come down politically have it far easier, but … it makes it harder for those who do.”

Kennelly stands behind what he’s tried to do at Cal Poly.

“I have zero regrets for speaking out,” he said. “Unless you speak out, people have a warped view of reality. They don’t realize that there are many more people who feel certain ways than might meet the eye.”

Kennelly said he doesn’t view himself as a hero. But he said that it is important to speak out to provide an example to those who don’t.

“People like myself are not just going to shrivel up and go away,” he said.

Editor’s Note: This article clarified wording surrounding the faculty support group for which Kennelly served as the first president.