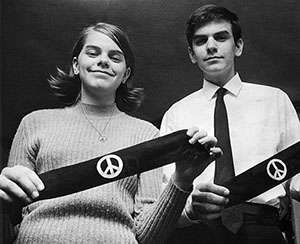 If you don’t know much about First Amendment law, start with the Tinkers.

Siblings Mary Beth and John went all the way to the Supreme Court in 1969 to defend their right to wear black armbands to their public school, a silent protest against the Vietnam War. The majority opinion recognized that students – and their teachers – don’t “shed their constitutional rights to freedom of speech or expression at the schoolhouse gate.”

Though that precedent for the rights of students has been muddied by subsequent rulings, Tinker still carries substantial weight – which is why it’s so heartening to see the siblings return to the high court to demand speech rights in the face of the “heckler’s veto.”

They filed a friend-of-the-court brief in favor of California students who were told they couldn’t wear American flag-themed clothing on Cinco de Mayo because Hispanic students complained.

Their lawyers are the UCLA law professor and blogger Eugene Volokh and Bob Corn-Revere, a D.C. heavy-hitter who’s leading the Stand Up for Speech litigation project.

Keep your Manson T-shirts at home

The 9th U.S. Circuit Court of Appeals approved the school’s action, saying it wasn’t a First Amendment violation, sparking a severe rebuke from three judges who asked for a full-court rehearing.

Even aside from the circuit split – the 9th Circuit diverged from the 7th and 11th – it’s long past time for the Supreme Court to answer “the question of student political speech at school,” the siblings said:

The lack of guidance [about applying Tinker] has left lower courts in the dark about how Tinker should apply in elementary and secondary schools today. This case is an excellent vehicle to offer such further guidance that will provide much-needed clarity for judges, administrators, and students.

Many school speech cases involve speech that might potentially lead to a hostile, even violent, reaction. Tinker itself involved such speech. This case is thus within the core of the Tinker doctrine, and provides an opportunity to address how the First Amendment applies to such potentially provocative speech. Indeed the Ninth Circuit’s approval of a heckler’s veto in this case shows how far some courts have traveled from Tinker.

The siblings warn that students will get the idea that “threatening speakers is an effective way to suppress speech,” producing more threats and more suppression of speech beyond patriotic sentiments.

The brief amusingly lays out the convoluted interpretations of Tinker, where in some parts of the country students can wear T-shirts with anti-homosexual messages, while in others, they can’t wear Marilyn Manson T-shirts because that band “promote[d] destructive conduct and demoralizing values.”

You think Vietnam was polite disagreement?

And nothing has really changed since Tinker, the brief says – debate over Vietnam was “vehement” across the country, and the district judge who upheld the anti-armband policy warned that wearing armbands would “disturb the disciplined atmosphere required for any classroom.”

The Tinker house even got death threats:

One person telephoned the Tinkers’ home on Christmas Eve and said “the house would be blown up by morning.” … A woman called for Mary Beth, and when the young teen got on the line, said, “Is this Mary Beth? … I’m going to kill you.” … The Tinkers received other threatening telephone calls as well. They also received hate mail, and their house was vandalized with red paint.

The heckler’s veto was also attempted during the civil rights movement and in the expulsion of Jehovah’s Witness children who refused to salute the flag, the brief says:

In such an atmosphere, a school principal confronted with a wave of patriotic fervor might conclude that preventing potential disruption justifies forcing a few dissenters to profess love for flag and country. After all, if the Ninth Circuit is correct in holding that the need for order in the public schools trumps the heckler’s veto doctrine, why not dispense with the prohibition against compelled speech as well?

School officials have “some latitude” to maintain order and prevent physical confrontations, but not “absolute discretion,” the brief says:

The [9th Circuit] decision … undermines constitutional values by teaching law-abiding students that the peaceful must surrender their rights in the face of hostility from the violent. Nothing could be more antithetical to First Amendment principles, especially in view of recent events.

Hinting at the growing use of anonymous communications tools like Yik Yak, the brief says:

[Students] might be able to convey their threats indirectly or anonymously, thus facing little risk of punishment. And for this little risk, they would get a substantial reward, in the form of successfully shutting up the speech they dislike – a cheap exercise of power over others that is especially likely to appeal to some

It’s a powerful brief, so read the whole thing.