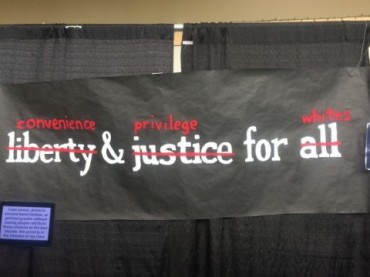 White authority figures judged by the color of their skin

Christian college students in one of America’s whitest cities learned all about “white privilege” – including one state law partially upheld by the current Supreme Court – at a school-sponsored art exhibit last week.

This is the eighth year that Seattle Pacific University, which has an evangelical social-justice bent, has hosted the “Born Identity” exhibit.

Last week’s three-day exhibit was promoted by the administration and student government, and the school’s social media outlets have advertised it for months.

It was put on by student and staff volunteers from Residence Life, Multi-Ethnic Programs and the John Perkins Center for Reconciliation, Leadership Training, and Community Development. “A huge part of our society has been constructed on white privilege because from the birth of our nation, ‘til only recently, whites (specifically white men) were the ones who held the power in America,” Jasmine Hairston, the student government’s intercultural ministry coordinator and lead organizer, told The College Fix in an email.

“Our motto of ‘All men being created Equal’ is something that our country was founded on, but still struggles to embody,” Hairston said.

The exhibit began with the impacts that the Chinese Exclusion Act of 1882 and World War II internment of Japanese Americans had upon the Asian-American community in the Seattle area.

This portion featured late 19th and early 20th century caricatures and news articles that demonstrated that era’s stereotypical view of the Asian community in America.

Andrew Jackson’s “Trail of Tears” was featured among injustices to American Indians.

Slavery, white supremacy and the civil rights movement dominated the African-American portion of the exhibit.

“The Scourged Back,” a famous photo showing a Civil War-era slave named “Gordon,” hung opposite “Whites Only” and “Coloreds Only” drinking fountains. The transcript of the Rev. Martin Luther King Jr.’s “I Have a Dream” speech hung on the wall as the speech played on loop in the background.

The exhibit moved into the current day by labeling certain immigration policies, relationships and even Christian worship styles as examples of white privilege.

“SB 1070: ‘Racism at the Border’” was the title for a satirical cartoon displaying the U.S.-Mexico border. The subtitle read, “Much of the frustration and anger related to Mexican immigration into the United States stems from fear and ignorance connected to race.”

The title refers to Arizona’s controversial immigration law signed in 2010, whose provisions include requiring police to determine the immigration status of someone during a “lawful stop, detention or arrest” when they have “reasonable suspicion” the person is in the country illegally. Though the Supreme Court threw out other provisions of the law in 2012, it affirmed the immigration status checks as constitutional.

Right next to several more political cartoons lambasting the U.S.-Mexico immigration situation were signs on the landmark Brown v. Board of Education ruling, which ended legally segregated public schools.

It’s the school’s fault for being mostly white?

Those who made it all the way to the end of the exhibit learned about “microaggressions.”

The sign read: “Racial microaggressions are brief verbal and behavioral indignities that can be intentional or unintentional that communicate negative racial slights to another person or group.”

Examples include these statements:

For anyone who still didn’t understand white privilege, a sign on the following section explained: “White Privilege is the rights, advantages, immunities, or exemptions granted to or enjoyed by white people beyond the common advantage of all others,” which are “often subtle, but pervasive.

“White Privilege is seeing people from other races as ‘different’ and understanding whiteness as ‘normal,’” it concluded.

To hammer home the point, the final section displayed the Pledge of Alliance’s closing words, “Liberty & Justice for All,” written in white. It was struck through in red paint, however, and rewritten to read “Convenience & Privilege for Whites.”