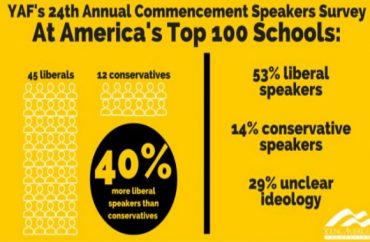 Young America’s Foundation conducted the annual survey, now in its 24th year, and found that this year there’s 45 liberal speakers and only 12 conservative ones slated for commencement ceremonies this month at the top 100 universities as designated by U.S. News & World Report. (Some colleges were not counted because they had multiple speakers, had their presidents speaking, or the speaker’s political ideology could not be ascertained).

“As usual, our nation’s brightest students will receive one final dose of liberalism from their progressive professors and administrators before heading out into the real world,” the foundation stated in releasing its results.

“Our nation’s colleges and universities are doing students a grave disservice by failing to provide balanced educational experiences. This is a clear illustration of that failure,” said Ron Robinson, president of Young America’s Foundation, in a statement. “Our country is brimming with articulate conservative leaders with important experiences to share, many of whom are far more qualified than Hollywood leftists like Matt Damon to offer their wisdom.”