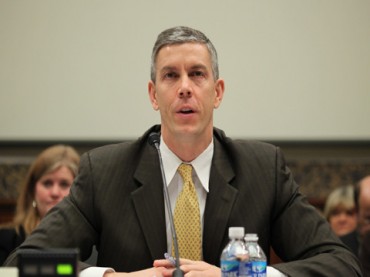 The warning of many conservatives has come to fruition: The dismissal of “traditional” methods of school discipline like  suspensions in favor of “progressive” measures — with fancy names like “restorative justice” and “talking circles” — is leading to chaos in the classroom and hallways.

The New York Post’s Paul Sperry, who was featured on “The O’Reilly Factor” last evening, wrote extensively about the subject this past Saturday.

The College Fix has noted the origins of such policies come right from the top: the White House. The Department of Education’s Office for Civil Rights has been pushing these “non-traditional” methods of discipline so that African-American students aren’t “disciplined more harshly.”

Education Secretary Arne Duncan says, “Maintaining safe and supportive school climates is absolutely critical, and we are concerned about the rising rates and disparities in discipline in our nation’s schools. By teaming up with stakeholders on this issue and through the work of our offices throughout the department, we hope to promote strategies that will engage students in learning and keep them safe.”

It doesn’t seem to be working that way, according to Sperry.

… everywhere it’s been tried, this softer approach has backfired.

… so far this school year, the Tribune reports students have suffered little consequence for infractions as serious as groping a teacher and bringing hollow-point bullets to class.

In Syracuse, meanwhile, teachers complain student behavior has worsened since the school district collapsed discipline structures in favor of restorative justice practices. They say teens are more apt to fight, mouth off to teachers and roam the halls under the more lenient policy. They’re even seeing increasingly violent behavior among elementary school children.

Los Angeles Unified School District is seeing a similar spike in campus offenses after its school superintendent followed federal orders to reduce suspensions of African-Americans. Even threats against teachers are ignored, as administrators’ hands are tied by the new policy.

In neighboring Orange County, teachers are dealing with increasingly violent and disrespectful student behavior since schools there also switched to the restorative strategy.

Recently mandated “positive interventions” have only exacerbated discipline problems in the largely minority Santa Ana public school district, where middle-school kids now regularly smoke pot in bathrooms — some even in class — and attack staff — spitting on teachers, pelting them with eggs, even threatening to stab them, according to the Orange County Register.

According to a recent teachers union survey, 65 percent of Santa Ana educators said the softer discipline system is not working. Dozens of teachers have filed hostile-work-environment complaints.

And this is just the tip of the iceberg.