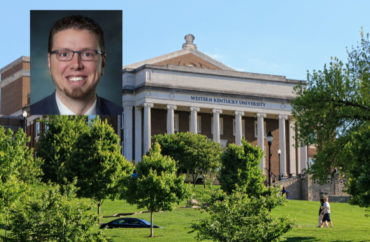 ‘[T]he reality is that many students feel that the university doesn’t open their minds; instead, it shuts their mouths’

Former Western Kentucky University English instructor Ryan Hall said he was fired after canceling his classes in protest of his school’s political bias to embrace and enforce diversity, equity and inclusion above free speech and academic freedom and discourse.

Hall, who describes himself as a liberal who has never voted for a conservative, said he risked his two-decade career in academia to defend the principles of classical liberalism the university “abandoned” in its pursuit of a DEI dogma.

“While I may not categorize myself as a conservative, the assaults on free speech, self-reliance, meritocracy, the family, science, and truth should alarm everyone,” Hall said in an email interview this month with The College Fix.

“Many have pointed out that our institutions of higher education increasingly look like the temples for a state religion attempting to create hierarchies based on byzantine and bogus ideas; such systems have never worked out well historically, no matter how many newly minted sinecures suggest otherwise,” he said.

Hall told The Fix he had canceled all of his classes, five of them, for a week while he confronted his university about its bias in February 2022.

“They fired me that same month after a few days of discussion. … They fired me because I would not return until we reached an agreeable solution, not because of the classes I had canceled, according to the email I received,” Hall said.

He said he did not have tenure, “though I had a long history of contract, full-time, and outside work with the university. I was a full-time instructor with an appointment at the time of firing.”

In a Dec. 12 column for the Foundation Against Intolerance & Racism, Hall wrote that the problem became clear to him after conversations with students who told him they struggled to learn and express their beliefs in partisan classroom environments.

“[T]he reality is that many students feel that the university doesn’t open their minds; instead, it shuts their mouths,” Hall wrote in his FAIR essay.

These students’ claims, he pointed out, are backed by data. Hall cited a 2020 study that found “by a tremendous margin, students of all political persuasions report that college faculty express more liberal views in class.”

“In the same study, 85% of ‘very conservative’ students in arts, humanities, and religion majors felt that they are not simply hearing the messages but feeling ‘pressured’—with all of the term’s ugly, unethical connotations.”

A recent College Fix analysis found no Republican professors at 33 departments across seven universities, just over 50 percent of the total surveyed.

Hall, in this piece, wrote he saw warning signs among faculty, too, such as “colleagues who scoffed at dissenting scholars like John McWhorter and Jonathan Haidt” and course syllabi designating the Middle Ages as “queer.”

Hall’s “final incitement” to cancel classes was a meeting with the English Department head, where he was told that department messaging had been intentionally crafted to support “Ibram X. Kendi and other ideologically-aligned writers’ ideas” and “the politics and political aspirations of the Black Lives Matter movement.”

After canceling his classes, Hall agreed to a meeting with the dean, where representatives reportedly told him department DEI messaging and BLM statements do not imply individual faculty members support the statements.

Rather than budge on Hall’s cited concerns, which included a department page linking to a bail collection fund and a section in WKU’s own DEI plan that acknowledges “animus towards individuals holding viewpoints deemed socially or politically conservative,” Hall said the university chose to fire him.

Hall told The Fix that the only solution offered by the dean was to have the same group who approved department DEI messaging vote on one of the messages. He said officials called his concerns “antiquated” and suggested “no student could really have an issue with the DEI policies and practices of the university.”

The College Fix reached out to Western Kentucky University and WKU English Department Head Alison Langdon to clarify the reason for Hall’s termination but did not receive a response.

“Colleges continue to inflate grades, teach less, and lack rigor, but instead of addressing those failings, DEI offices are being used to funnel away resources and mask the continued failures of our higher education system,” Hall told The Fix.

“Except for a few fields and programs, it simply makes no sense for parents to pay tens of thousands of dollars for little more than indoctrination,” he said. “Efforts to raise money from alumni should be rebuffed at every turn, as it is audacious that the universities would manage their money and charge so poorly and then ask for even more.”

“Universities are largely escaping scrutiny by trading on a reputation that no longer matches reality or through its monopolistic credentialing system, which one could fairly label a racket,” he said.

To avoid accusations of seeking financial gain, Hall does not intend to file a wrongful termination lawsuit, he said. He instead hopes to work with groups that are fighting to revitalize or establish alternatives in higher education.

“I applaud the efforts at the New College of Florida or the University of Austin and would welcome an opportunity to teach for a similarly constituted school,” he said. “I will continue to write and speak about how higher education has failed and is engaged in a massive public deception primarily motivated by ideologues and careerists.”