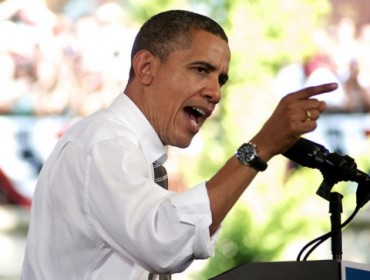 Three Wisconsin professors have come up with what they think is a brilliant fix for the budget crisis in Washington. They want Obama to violate the constitution and seize dictatorial powers to extend the debt limit, and then call for his own impeachment hearings afterward.

Does that make sense to you?

The University of Wisconsin-Madison is known as one of the most liberal universities in the country. This week, three political science professors from the university may have taken that liberal partisanship to a new extreme, however, by calling on Obama to seize unilateral control of the government in order to end the budget crisis.

Howard Schweber, a political science and legal studies professor, along with Ken Mayer and David Canon, both political science professors, joined forces to pen an op-ed in the Wisconsin State Journal, essentially begging Obama to take on unprecedented new powers in order to avoid default on debt payments:

President Barack Obama has a few choices. He can allow the nation to default. He can allow the tea party wing of the Republican Party to dictate the terms of national policy, despite the undemocratic nature of this outcome and the likelihood it will lead to further brinksmanship. Or he can unilaterally order the Treasury Department to issue new bonds. All three are unattractive, but the last is the least damaging to the nation…

We propose that if the House fails to act, Obama should unilaterally order the Treasury Department to issue new bonds…

The three professors are ready, it seems, to declare Obama temporary dictator in order to resolve the situation, they even go so far as alluding to the broad “inherent” powers George W. Bush claimed in the context of the war on terror as justification for Obama’s–what?–shall we say, war on default?

What is so ironic about this letter is that you can be sure these three professors were railing against Bush for eight long years, complaining about the Patriot Act, declaring his actions unconstitutional, decrying the overreach of government power, etc, etc. Now, with Obama in the White House, nothing, it seems, is unconstitutional. Or maybe, more accurately, the constitution simply means nothing to them. It’s just an instrument, a rhetorical device really, used to claim an advantage for anyone who wears the word “Democrat” around his neck.

It’s remarkable to watch both parties’ attitudinal change whenever they control the White House. Suddenly, they become great advocates of executive power. The constitution gives Congress the sole power to authorize spending. Nothing could be clearer.

These three professors’ naked disregard for the constitution, is almost too stupid to take seriously. Except that they are serious. And that’s what is so striking about this op-ed, which for all it’s lofty pretensions–seeking to advise the White House and all–isn’t worth the paper it was printed on. To them, the constitution isn’t real, binding law; it’s simply a symbolic device to be used in whatever sort of argument is most convenient to them at the time.

Most oddly of all, the professors suggest that after Obama seizes unilateral control of the government’s purse strings, he should then ask House Republicans to try to impeach him, “so that this constitutional crisis can be publicly and formally debated in the Senate” (where impeachment hearings are ultimately decided). Conveniently, the Senate is controlled by Democrats at the moment.

The professors are right about one thing: America is facing a constitutional crisis. It’s a crisis made up of so many in power who, like the authors of this op-ed, view the constitution as little more than a hindrance to their political goals. Something to work around. They read the constitution, looking for loopholes the whole time.