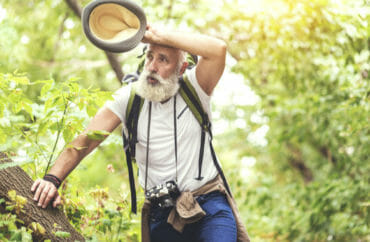 Ten years later, I still remember reading about the grossest academic exercise this side of fun with abortion.

Two MFA students at George Washington University went beyond the competitive-eating circuit by eating 18 cans of SpaghettiOs Meatballs and throwing it up in a stunt “combining pseudo-bro performance art and personal bragging rights,” according to the Washington City Paper.

Make sure you haven’t recently eaten when you read this:

As the faux-drinking games wore on, though, the SpaghettiOs began sliding more slowly from their cooking-spray-greased cups. [Kenny] George dry heaved, loudly; [Gina] Tibbott appeared on the verge of fainting. George rested on the floor; Tibbott insisted on a cigarette break. The vomiting became urgent. George began encouraging his gag reflex with his finger. Tibbott vomited through her nose. George poured a large cup into his mouth, only to spew it out instantly, blocking the mess with his hands. Tibbott’s vomit receptacle became so full that it began to splash back on her face as she emptied her stomach into it.

This wasn’t even the first SpaghettiOs-related art project for George, who previously “exhibited a series of photographs of himself sloppily consuming the stuff straight from the can” at two GW galleries. This is what some students do with their federal student loans.

I recalled this gross-out waste of college upon reading about something uplifting and hopeful: another college on the small list of those that refuse federal aid.

Hillsdale, Grove City, Thomas Aquinas – now get to know Wyoming Catholic College, whose selling point is its incorporation of nature into the very fabric of the curriculum.

Humanities Prof. Virginia Arbery describes the 10-year-old school in an article for the Martin Center for Academic Renewal, and you should pass it along to the tech-addicted young people in your life, regardless of their religious beliefs.

From the Student Life blog (and freshman Emily Felsheim), “A Whirlwind of Adventures!” a first-person account (with lots of pictures!) of the Winter Expedition the Class of 2021 undertook earlier this month. (Read more at https://goo.gl/iCC9pC).

A post shared by Wyoming Catholic College (@wyomingcatholiccollege) on Feb 3, 2018 at 8:38am PST

Wyoming Catholic starts with a mandatory three-week backpacking trip, and students crack open the Iliad, study “horsemanship” and memorize poems when they return, according to Arbery, whose husband Glenn is college president:

Those freshmen embark on a January hike in these same mountains, building igloo-like huts called quinzhees. The purpose is not to make them buff (though they are) and trained in wilderness survival (though this, too, is the case). The purpose is to give them a firsthand experience of the splendors of nature, God’s first book.

Images dead in poetry come alive with the ardor and beauty of living together, spending time in a small group where each member must learn to lead and to fend for himself. In this detoxing period—far from computers, noise, and distractions—young people encounter beauty, danger, and friendship. Decisions matter because everyone’s safety depends on how accurately the leader for the day reads a map, confronts a grizzly, or deals with a storm.

From last week's "Wyoming Experience." After a round of hunter safety and chukar hunting (put on with the help of the state's Department of Game and Fish), the students finished off their Outdoor Week with some backpacking, horseback riding, and caving.

A post shared by Wyoming Catholic College (@wyomingcatholiccollege) on Apr 26, 2018 at 7:20pm PDT

They read more than 120 great books in their four years in a curriculum heavy on theology and philosophy, and – gulp! – they give up their mobile phones during the academic year. As in, they are seized and stored until students return home for semester breaks:

“Not me!” some 17-year-olds exclaim, but after a few weeks, these new students notice a profound change in themselves. It is amazing how attuned our undergraduates are to one another, to their professors, and to their studies. …

The college recognizes that the problem with cellphones is the way in which our memory is endangered because of them. As St. Augustine wrote in his Confessions, “The seat of the mind is memory.” And as the pioneering psychologist and philosopher William James said in an 1892 lecture, “‘The art of remembering is the art of thinking.’ Only by encoding information in our biological memory can we weave the rich intellectual associations that form the essence of personal knowledge and give rise to critical and conceptual thinking.”

If the young people in your life want the challenge of their lifetimes – at least until they try to live out Rod Dreher’s Benedict Option – offer to visit Wyoming Catholic College with them.