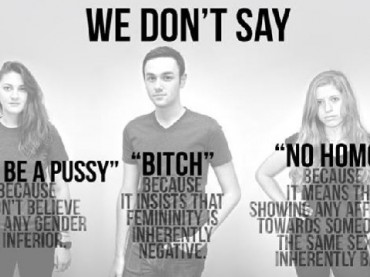 A new word-discouragement campaign at Duke University has labeled phrases such as “Man Up,” “That’s So Gay,” and “Don’t Be a Pussy” offensive language that “delegitimizes” homosexuality and oppresses and insults people.

But as the campaign has gained national popularity, its detractors have bristled at the effort, calling it a politically correct war on words that will stifle free speech and suggesting its true aim is to redefine terms to control public opinion and – ultimately – public policy.

In fact, the “You Don’t Say” campaign creators have admitted as much.

“Language is a reflection of how we think about others and view the world,” Jay Sullivan, a student leader of the campaign, tells Duke Today. “My goal is to…. help facilitate discussion about how language affects many social issues, from race to gender and sexuality.”

The campaign consists of a series of black-and-white memes with students posing behind large pledges to avoid so-called offensive language.

“I don’t say ‘No Homo’ because it delegitimizes love and sexual identities,” says one.

“I don’t say ‘Man Up’ because the strongest people I know have cried in front of me, regardless of their age, gender or sex,” says another.

“I don’t say ‘Tranny’ because it’s insulting to transgender and genderqueer communities,” adds a third meme.

Other banned words include “bitch,” because it “insists feminism is inherently negative,” “‘fag,’ because it only serves to hurt and oppress homosexual men,” and “pussy,” as it “implies that having a certain feature is indicative of being a coward.”

The recently launched campaign has spread far and wide on social media and gained national attention in a variety of news reports. The effort is similar to the recent “Ban Bossy” campaign, and akin to other university student efforts that have banned the term “illegal immigrant” on campuses.

The campaign is a collaborative effort between a newly formed group at Duke University called Think Before You Talk and Blue Devils United, a Lesbian, Gay, Bisexual, Transgender and Queer student advocacy group.

The campaign has gained plenty of supporters, as well as detractors, whose reactions range from sarcastic to disgusted.

“I can’t say anything about an individual person, because it might be construed as offensive to a larger group… even if I had no intention of offending a larger group,” asks one Facebook post.

Others balk at the idea of being told how to choose their daily language.

“As a thinking individual, I don’t and didn’t need some children from Duke University admonishing me for ‘thinking any gender is inferior,’” says another. “Do you see what they did there? ‘Any gender.’ Not ‘either gender.’ It’s all about redefining terms, redefining life.”

Some commenters on Facebook hardly took the campaign seriously at all: “There is nothing wrong with being a HOMO. We’re all homos… homosapiens.”

In an interview with The College Fix, Dr. Mark Hendrickson, economics professor at Grove City College, expressed concern for the direction and potential implications of the campaign, such as the idea of a possible enforcement mechanism.

He also questioned the discouragement of statements such as “man up.”

“I’m a little concerned about censoring a phrase like ‘man up’… a world without manliness, like a world without femininity… would be a pretty dismal place,” Hendrickson said.

Hendrickson acknowledged the need for consideration of others when choosing one’s language, but he observed that proponents of the campaign appear to have a narrow agenda.

He noted, especially with the impending graduation season, that similar tolerance is often not afforded to conservative campus speakers.

“With anybody advocating the banning of a certain word or phrase… would they be willing to publicly say, ‘I promise in return to never hinder a speech by a political figure with whose political philosophy I disagree?” Hendrickson said.