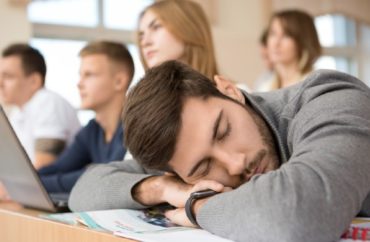 One reason many college students may have loans is that they begin their freshman year without any intention to even try to graduate on time in four years.

“Only 51% of full-time students earned 24 or more credit hours in their first year. Less than a third (28%) earned 30 or more hours of credit,” a new study from the National Student Clearinghouse reported. “The average full-time student does not even attempt enough credits to complete a bachelor’s degree in four years.”

The education research group compiled its latest report based on data from over 900,000 students at 342 different higher education institutions.

A typical four-year college degree requires 120 credits to graduate, which is 30 credits per school year, or 15 per semester. Yet many do not begin the first day of classes in August with a plan to complete 30 credits, or generally 10 classes, by the following May.

Many students also struggled to complete the classes they did sign up for – and unsurprisingly, enrollees deemed “not college ready” did the worse when it came to Credit Completion Rate. CCR refers to the “ratio of credits earned to credits attempted.”

Want to stay out of debt and benefit from college? Try

So what can we take from this?

The number one reason why students are not graduating college in four years, which subsequently leads to more student loan debt, is that they are not even trying. Some students may not be able to afford 18 credits and can only afford 15, sure, but many colleges bundle credits together and charge the same for a range of 12 to 21 or even give discounts if you go above 18.

Generally the course of study is laid out very clearly and is simply a math equation – someone must complete 120 hours, so if you want to do that in four years or less they must take a certain amount each semester, and can speed up the process using summer school or “J term classes” or spring break classes.

At one point, I set out to graduate Loyola early, not just in four years. So I went into the online academic adviser service, mapped out what classes I needed to take and set about doing that with 18 credit semesters, plus two summer school classes.

Things happen in life – people get sick and have to take off a semester, incomes change and students take time off to avoid further debt and sometimes universities offer a mandatory class only once a year. I understand that.

But a good way to graduate on time is to start day one with a plan to do so – and even take extra classes in the event there are problems down the road that require a reduced course load.

That same approach – seeing the finish line and mapping out a path to get there, is also, by the way, a good way to pay off student loans.