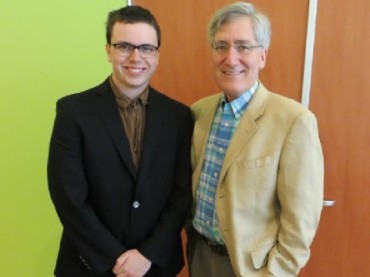 To summarize the biography and works of one Robert P. George would be to put in writing a wealth of wisdom and experience few can match.

It is sufficient to mention that this Princeton University scholar is called by The New York Times “The Conservative-Christian Big Thinker.” His insights are valued additionally so because he bravely speaks them from behind the walls of the Ivory Tower.

Defending Judeo-Christian values while securing tenure is no easy feat, but George, in this exclusive interview with The College Fix, explains how the quality of his teaching and scholarship allowed him to take root in the halls of the left-leaning academe as one of the most outspoken voices for the Right.

From this vantage point, George offers words of wisdom on the plight and status of conservatism and the liberal arts in the university today, and what can be done to improve it. The interview was conducted by College Fix contributor Ryan Shinkel recently at the University of Michigan.

As professor of jurisprudence at Princeton, you are unusual in that you are an outspoken social conservative with an academic status in the Ivy League. Conservatives tend to be something of an endangered species in the university. So, did your views make it more difficult to achieve the position you are in? And if not, what other way did they influence your journey in academia?

George: I’ve always been interested in ideas, especially ideas about morality, law, and the relationship between the two. It was that interest, together with the inspiring example of some of my professors in college and graduate school, that led me into academic life. From the beginning of my career, I have sharply dissented from central doctrines and key tenets of liberalism and secularism. They seemed unsound to me from the start, and additional study and reflection over the years have only reinforced my view about that.

It’s a view I have not tried to hide—I never wanted to and, in any case, would have been psychologically incapable of it. That caused a bit of trouble when I came up for tenure. There were a few people on the faculty for whom the prospect of granting tenure at Princeton to an out-of-the-closet socially conservative legal and political philosopher was unappealing, to say the least; but they were, in the end, unable to stop it. For that, I have many honorable liberal colleagues to thank.

While disagreeing with me about abortion, marriage and sexual morality, and other hot-button topics, they still supported me because they believed that the quality of my scholarship and teaching met or exceeded the standard for tenure at Princeton.

A few years later, I was installed as Princeton’s McCormick Professor of Jurisprudence. Again, that was only possible because there were influential liberal members of the faculty and administration who were willing to lay their differences of opinion with me aside and judge my case on its merits.

What from your experience in co-teaching a freshman Great Books course with your friend and political opposite, Cornel West, and other leftists do you find as a lesson for conservatives in academia?

George: Conservatives should not isolate themselves. We should be constantly on the lookout for opportunities to engage those of our colleagues on the left who share our love of ideas and our desire to get at the truth of things. Our model should be Socrates:  the gadfly who confronts his interlocutors with difficult—even uncomfortable—questions, and who is prepared to follow the argument wherever it leads.

Of course, some people will hear me say that and say, “Hang on there, Professor, I have no taste for hemlock.” And I certainly don’t deny the professional risks one takes in boldly questioning cherished campus orthodoxies. But preserving one’s integrity, and encouraging one’s students—and even one’s academic colleagues—to love and honor truth and seek it with determination and purity of heart, is its own reward.  It is worth the risk.

Roger Kimball in his book, Tenured Radicals makes the observation that often the resistance against identity politics in the classroom by students “expresses itself as simply indifference to the humanities: if studying the humanities has come to be an exercise in intellectual obscurantism and political sloganeering, well, there are other subjects worth pursuing. Is it any wonder that humanities enrollments have fallen so precipitously in recent years?”

Would you agree that the politicization of the curriculum has encouraged this indifference students may have to the liberal arts? What do you find is a way to catalyze their interest in the arts and humanities if they have become indifferent in the manner Kimball describes?

George: Roger Kimball is usually right, and he’s certainly right on this point. Identity politics is toxic, especially in the context of academic life, and most especially in the humanities. It corrupts humanities curricula and, ultimately, trivializes them.

Students lose interest for a completely understandable reason: there is nothing of interest left in them to study. To catalyze interest in the humanities we need to restore the integrity of scholarship and teaching in these fields. We need to abandon foolish reductionist approaches (such as “deconstructionism”) and look to literature, philosophy, history, and other humanistic disciplines for insight and wisdom about the human condition—human hopes and aspirations, human possibilities and limitations, human values and moral principles, human rights and flourishing, human nature, dignity, and destiny.

I’ve heard you speak before of what the late sociologist Robert Bellah termed “expressive individualism.” What does that term mean, and how do you find it instantiated in the university?

George: I’m in my late fifties. The generation in which I grew up proclaimed itself the “me-generation.” Its slogan was “if it feels good, do it.” That’s a bad philosophy of life, but it has had a significant impact on our culture and on succeeding generations.

Lots of people who would not formally sign on to a philosophy of expressive individualism nevertheless implicitly buy into its key premises—and, as the old saying goes, “ideas have consequences.” At the core of expressive individualism is the identification of the self with one’s feelings and desires. Fulfillment, it is supposed, consists in acting in conformity with one’s feelings and getting as much desire-satisfaction as one can get. Feelings and desires are largely treated as “givens,” and not amenable to rational evaluation and criticism. Being myself—being true to myself—means accepting my feelings and acting on my desires, at least when that can be done in ways that do not immediately and palpably cause harm to others. Expressive individualism thus underwrites a kind of moral libertarianism which, in my view, truncates the quest for wisdom and often frustrates the project of personal moral reform. It also undermines the intelligibility of true friendship (which is more fundamentally volitional than affective) and obscures the point and value of making genuine sacrifices for others and for causes larger than oneself.

The alternative vision—one that refuses to treat feelings and desires as “givens”—is the one proposed (in different forms) by the major  philosophical and religious traditions of both East and West and the great teachers of mankind throughout history.

George: My view is the classical one: liberal arts scholarship and education is a truth-seeking, wisdom-pursuing enterprise. That is why we engage, and invite our students to engage, the great works of literature, philosophy history, and the like, from Sophocles and Virgil, to Plato and Aristotle, to St. Augustine and St. Thomas Aquinas, to Chaucer, Shakespeare, and Milton, to Gibbon, Johnson, and Burke, to Locke, Hume, Kant, Newman, Mill, and Nietzsche—to name only a few.

If there is a connection to my views about natural law, it is the belief that the illumination, understanding and wisdom one gains in the serious engagement of great works is intrinsically humanly valuable. Intellectual knowledge—especially knowledge of important, existential matters—is a basic component of the integral flourishing of human beings as rational creatures.

The liberal critic KC Johnson praises your James Madison Program for encouraging the study of traditional fields of history. However, Johnson writes, “American history has been radically transformed on our campuses. Traditional topics are now not only marginalized but ‘re-visioned’ to become more compatible with the dominant race/class/gender paradigm.”

How do you find history being taught on U.S. campuses today relating to Johnson’s description, and what would you recommend from your own experience with the James Madison Program as a way to restore a more balanced approach in academia?

George: The trouble is not that people want to study issues of race, or social class, or the relationships between the sexes. There is much to be learned from such study. The problem is what you rightly call the “dominant race/class/gender paradigm,” in which everything is viewed through a certain ideological prism. That approach distorts far more than it illuminates. It’s a dead end, and most people understand that.

True, academic ideologues can indoctrinate a certain number of the young people in their charge—and that’s a shame. But there is a great hunger out there in America for sound, truly illuminating, works of history. One sees this in the remarkable success of serious biographies of the American founders and excellent books about important events in our history. This success has been enjoyed both by independent scholars such as David McCullough and Richard Brookhiser and by gifted academic historians such as James McPherson and Gordon Wood. I find that heartening.

And there is every reason to suppose that it will continue. As for the success of the James Madison Program at Princeton, the lesson there is “build it and they will come.”

What do you recommend for social and fiscal conservative students, researchers, and teachers at the university if they wish to encourage a fairer approach to all relevant ideas?

George: Be polite, but determined—even aggressive—in questioning prevailing ideological dogmas on campus and defending your views. Demand fair treatment and make some noise when it is not accorded. Hold universities to their professed principles of fairness and pluralism—openness to a wide range of opinions and freedom of thought and expression. Refuse to tolerate double standards. Build organizations. Actively seek faulty allies. They are there—find them.

College Fix reporter Ryan Shinkel is a student at the University of Michigan.