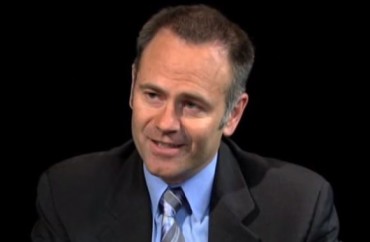 Economist Tim Groseclose on his journey to academic freedom and contentment

It’s not that Professor Tim Groseclose doesn’t get into debates with his peers at George Mason University, he does – and they’re robust and exciting exchanges.

At UCLA, as a known conservative, Dr. Groseclose’s view were shunned and unwelcomed, and he had to meet largely in secret with a cadre of like-minded peers loosely called “Group C” to engage in discourse. But at George Mason, cordial academic disagreements are allowed, encouraged and appreciated as a healthy part of campus life, he said.

“It’s incredible how vibrant the discussions are, we get into arguments all the time. And I like that, it’s fun to argue with friends and still be friends with them after the argument, and also know that they are not going to try to stab me in the back on the raise or promotion later on just because we had this disagreement,” Groseclose said in a recent telephone interview with The College Fix.

Groseclose has worked as an economics professor at George Mason – the largest public research university in Virginia – for the last year, and loves it. He describes it as an environment with more like-minded people who are not “knee-jerk leftists” but rather proponents of a free market economy.

The story of how Groseclose ended up at George Mason after working for about a decade as a political science professor at UCLA is filled with intrigue, drama – and even a “midlife crisis” of sorts – but in the end, he said it’s a move he has never, ever regretted.

In 1987, Groseclose received his B.S. degree in mathematical and computational sciences from Stanford University, and in 1992 earned a PhD from the Stanford Graduate School of Business. After faculty appointments at Ohio State and Stanford, Groseclose took a job as a political science professor at UCLA in 2003.

It was there he said he found himself on the receiving end of political viewpoint discrimination after a series of events at the Southern California campus.

In 2005, Groseclose was asked to serve on the university’s faculty oversight committee on admissions, a position he did not wish to accept. However, a colleague encouraged him to join to represent a conservative viewpoint, and Groseclose agreed.

“He said, ‘You know, if you don’t do things like this, you just don’t know where the faculty is going to go. We need people like you to be on some of these board committees,'” Groseclose recalled his friend saying.

Meanwhile, he also began researching media bias, and his findings showed most mainstream media outlets were left of center. Groseclose reported those findings in an article, then later published them in the 2011 book Left Turn: How Liberal Media Bias Distorts the American Mind.

In 2012 at UCLA, Groseclose said he was up for what he considered an automatic promotion that would include a new title and potentially a 4 to 12 percent raise. Despite favorable letters and approval from nearly all of the professors in his department, an anonymous campuswide committee denied him the promotion.

Alex Tabarrok, an economics professor from George Mason University, happened to call Groseclose around this time asking him to interview for a position in the economics department. Groseclose said he had had a visiting position at George Mason 24 years previously and had positive experiences and friendships at the school.

He interviewed for the position in the fall of 2012, accepted GMU’s offer in fall of 2013 and moved his family across the country in the summer of 2014. He did not even go to his superiors at UCLA to seek a counter offer.

“I was just so sick of UCLA that I didn’t even want to think about staying,” he said. “I did it right around the time I turned 50, and for my midlife crisis I became an economist, I joke.” In April 2014, just a few months before leaving UCLA, he published Cheating: An Insider’s Report on the Use of Race in Admissions at UCLA, which showed how the public university uses illegal affirmative action measures in its admissions processes.

UCLA used affirmative action in an effort to admit black students at a much higher rate than they would have been if the school had followed the letter of the law, and those decisions had a detrimental effect on the acceptance rates of white and Asian students, his research found.

Tabarrok said GMU had wanted Groseclose for a long time.

“I happened to call him, and I think we just got lucky in that he was upset the day I called him,” Tabarrok said. “And, as often happens, very good faculty are mobile, and you can lose them quickly, so UCLA lost a star, and we got one.”

“He’s a great teacher, he’s a good department colleague, he’s a team player, and so we were happy to land someone of his stature,” Boudreaux said.

Groseclose said he intends to work at GMU for the next 30 years while he watches the university advance through the ranks of top schools in the nation.

“It’s going to be fun to watch that and say that I am a part of that growth,” he said.

Besides, Groseclose said he prefers northern Virginia to Los Angeles, as the people seem more polite and friendly. His proximity to Washington D.C., “the center of the universe,” is an added bonus.

Despite his satisfaction with his move to George Mason, Groseclose said he has a “very sour view” toward higher education in general.

In his book “Cheating,” Groseclose wrote about his frustrations with UCLA for engaging in and denying its affirmative action practices.

“The last chapter of my book is titled ‘Institutional Dishonesty,’ and it’s kind of my take on higher education right now,” he said. “And the idea is that it’s so imbalanced, so much tilted to the left that what it’s done is cause the left-wing professors to actually start behaving in perverse ways and one way is they have gotten so used to this noble lie. There are certain things that even if they know the truth is opposite, they feel it’s their moral duty to say a lie, and I think that’s especially true in race.”

However, race-based admissions are not the only issue that Groseclose has observed as having a skewed liberal bias.

His colleague James Enstrom, an epidemiologist doing research at UCLA, was fired in 2011 after he critiqued UCLA’s air pollution research. Enstrom sued the school and won his case earlier this year, after which his access to UCLA research equipment was returned.

But Groseclose said it had bothered him that the university took such drastic measures and that none of the administrators challenged Enstrom’s termination.

“I saw that something similar could happen to me,” Groseclose said.

Groseclose and Enstrom were part of a group of conservatives called Group C back at UCLA. The group served to “generate some camaraderie among people who are conservative,” Enstrom said in an interview with The College Fix.

“The situation here at the University of California is really not productive for a healthy academic environment,” Enstrom said. “It really is more indoctrination than it is education in many respects.”

Enstrom also said the environmental activism of his liberal colleagues is more so a part of a political activism. The dominant liberal populace has created an environment that has silenced critics from the right.

“They’ve managed to manipulate the system so that when people like myself raise objections, we don’t get addressed, our concerns do not get addressed, we just get retaliated against. And Tim has felt so bad that he left,” Enstrom said. “He had an endowed professorship, he wasn’t in danger of actually losing his job in spite of the fact that he is very outspoken on these things like admissions problems and other biases that exist, media bias and political bias that exist at UCLA. But he just gave up and left.”

Enstrom said that he has found through his work with students that they prefer not to put themselves in the spotlight for their dissenting political opinions out of fear and intimidation.

“In order to really benefit from a college education you have to learn to appreciate academic freedom and academic diversity and the meaning of freedom of speech and freedom of the press. These are really important concepts that students have to come away with,” Enstrom said. “If they come out with an education that is just more brainwashing, then they really are not benefiting the way they should.”

Enstrom said he was disappointed when Groseclose left UCLA because he was so outspoken against its liberal political correctness. He said he hopes to continue spreading awareness to these issues and make a difference at UCLA.

Groseclose said that, in the liberal view, “you are supposed to get results that support the left-wing view.” This has developed into a “habit” of professors championing political correctness rather than the truth, he said.

As far as UCLA’s admissions process is concerned, Groseclose said the only thing that has changed since he left is that the admissions committee will never include another conservative, “but otherwise, everything is exactly the same.”

During his time at UCLA, he saw that being outspoken isn’t always enough to turn the tide.

“I could see that I just had no influence,” Groseclose said. “I’m kind of the crazy conservative, you know, ‘Put him in the corner. We like that he publishes in these top journals and helps our prestige rankings for that, but otherwise we don’t want to listen to him.’ ”

Ultimately, Groseclose said he encourages conservative and libertarian families to spend their tuition on schools that “are not so monolithically left-wing” rather than paying tuition to a school, such as UCLA, “that is just ruining society.”

College Fix reporter Ellie Porter is a student at the University of Richmond.