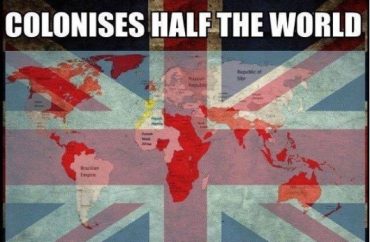 The problem is that the meme is demonstrably false

A meme circulating among college students mocks the British as hypocrites for voting to leave the European Union after “colonizing half the world.”

It suggests the United Kingdom’s colonialist history should preclude it from wanting to limit the number of immigrants it accepts.

To students unfamiliar with the history of the British Empire, a quick glance at the map might easily be digested as proof of a larger narrative often promulgated on college campuses: the white man as evil imperialist. It’s a topic of some debate as many critics of the decision to leave the EU (only citizens of the United Kingdom were allowed to vote in the referendum) claim it was a result of anti-immigrant sentiment within the UK and a response to the EU’s free migration laws that have forced Britain to host an influx of immigrants. Among voters under 24, 75 percent voted to remain in the EU according to Politico.

The problem is that the meme is demonstrably false.

Most areas designated on the map as former imperial possessions were never part of the empire.

Additionally, more territory is depicted as being under British control than ever actually was in the current states of China, Honduras, Jordan, Somalia and the United States.

MORE: Where this meme on higher education costs goes wrong

Whether or not the map was intended to be anachronistic, the United Kingdom never controlled all of the depicted lands at once. The shape and extent of the empire changed drastically over the course of centuries, reaching its territorial peak in the early 20th century and diminishing in size until the present.

As of 2015, there were more than 8.4 million foreign-born residents of the United Kingdom, totaling more than 13 percent of the population.

The lesson is that college students who share memes without a strong foundation in history do no favors to the debate.

It should also be noted the meme’s map errs in omission as well. Current states that were once colonies or possessions of the British Empire but are not designated by the meme include: Iraq, Oman, Qatar, Sierra Leone and the United Arab Emirates.

Some of the other states depicted on the map are entirely fictional. The “Republic of Sibr” in Siberia never existed. (“Sibr” is also not a correct transliteration of the region’s name in Russian.) The short-lived Russian Republic, which only lasted from September to November of 1917, included much more territory than depicted.