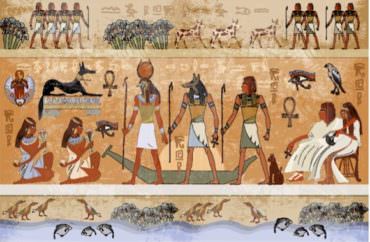 Egyptian student group president blasts ‘white fraternity,’ claims ‘this is much larger than just a party’

The University of Michigan’s Delta Sigma Phi chapter announced Saturday that it canceled a “Nile”-themed party after the president of the school’s Egyptian Student Association criticized the fraternity on social media.

The party urged students to “honor our Egyptian roots and join us on the night of September 1st to celebrate our newly built pyramid” and to “come to [the party] as a mummy, Cleopatra or King Tut,” according to a now-deleted Facebook event page, The Michigan Daily reported.

Egyptian Student Association president Yasmeen Afifi lambasted the fraternity and the party in a series of tweets, repeatedly signaling the frat brothers out for their skin color.

“I am the president of the Egyptian student association and these whites don’t know what they got themselves into,” she tweeted Friday.

“White umich back on their bull [expletive] and cultural appropriation can’t wait !!!,” another tweet reads.

The Executive Board of Delta Sigma Phi at Michigan subsequently released a statement Saturday, apologizing for the event on Facebook.

“We sincerely apologize to anyone who was hurt by the theme choice. We have learned our lesson and will take more precaution in the future when deciding themes for events,” the statement reads.

“We pride ourselves on being a diverse social fraternity with members from a wide variety of religions, races, backgrounds, sexual orientations, and other identities. It would never be the intention to make anyone from any group…feel unwelcome or uncomfortable,” the statement continues.

Delta Sigma Phi said in the statement that the party theme came from the “connection between the values and themes of Ancient Egypt and the national organization of Delta Sigma Phi.”

Afifi released a statement Sunday via Twitter voicing her displeasure with the party’s theme.

“As an Egyptian, and one that has respect for various cultures and civilizations, this party is extremely offensive and disrespectful,” she wrote. “I take pride in the grandeur of my people’s legacy and will not allow my culture to be appropriated for your entertainment.”

“Although I’m not surprised and couldn’t expect more out of a white fraternity,” Afifi continued, “the conversation still needs to be had. This is much larger than just a party; it is the privilege that led this frat to think it was remotely okay.”

“White people have invaded, stolen, erased, and defaced numerous ancient Egyptian artifacts, symbols and temples in attempt to claim one of the greatest civilizations as their own,” she wrote.

Delta Sigma Phi’s president Samuel Finn declined to comment, claiming that inquiries must be directed to the national organization.

The Delta Sigma Phi national organization did not respond when asked twice for comment on the matter.

Reached for comment over Facebook, Aifi told The College Fix: “I think the best action is to rewrite their statement after doing some thoughtful research. Only way to change is through education and I want them to research on colonialism and Orientalism to truly understand why this party was offensive.”

“At the end of the day if you don’t like the party then don’t go to the party,” he added.

Afifi told The Fix she didn’t want to comment on whether wearing togas would be offensive to Ancient Romans. However she said, “There is a difference between appreciating a culture and learning about one than to wear togas for fun.”

*UPDATE: In an e-mail obtained by The College Fix dated Monday night, August 21, the national headquarters of Delta Sigma Phi issued an apology for the party in question. “Cultural insensitivity and appropriation have no place in our organization,” said Delta Sigma Phi spokesman Patrick F. Jessee. “The theme of this party called into the spotlight stereotypical tropes of Egypt that perpetuate myths about the Egyptian people, spurred by popular media and Hollywood blockbusters, and it was shortsighted to use Egyptian culture as a theme for a party.”