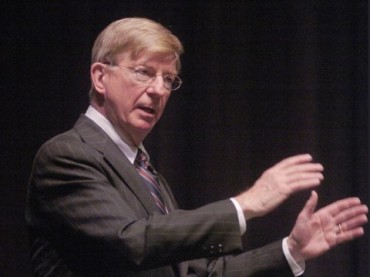 George Will won’t be disinvited from speaking at Michigan State University despite protests by some students and a petition drive, provoked by Will’s controversial June column on sexual assault, Inside Higher Ed reports.

University President Lou Anna K. Simon wrote on her website Tuesday that the school invited Will in the spring, before his column in which he made “statements about sexual assault that many found offensive,” and the invitation also included liberal filmmaker Michael Moore as the afternoon commencement speaker.

Simon noted that Will was a lecturer at the university’s James Madison College “some years ago” and he has a “long and distinguished journalistic career”:

George Will is not our first controversial speaker at MSU over the years, and he will undoubtedly not be our last. Some were controversial when they were invited. Others became controversial after our invitation was accepted. We’ve heard from Richard Nixon and Bill Clinton, Jesse Jackson and Desmond Tutu and Elie Weisel. …

I’ll leave it to Mr. Will to defend his comments and values, because this isn’t about George Will. This is about us. And it is about the role of universities in a democratic society.

Simon warns that disinvitation is a two-way street:

What it does mean is this: Great universities are committed to serving the public good by creating space for discourse and exchange of ideas, though that exchange may be uncomfortable and will sometimes challenge values and beliefs. There is no mandate to agree, only to serve society by allowing learning to take place. If universities do not hold onto this, we do not serve the greater good. Because next time it will be a different speaker and a different issue, and the dividing lines will not be the same.

Like other administrations, Simon tries to meet protesters halfway:

Recognizing that George Will’s visit will be painful for many, the Task Force will convene a town hall meeting as early as possible next semester to allow members of the campus community to share thoughts following this weekend’s commencement, as well as to offer perspectives and approaches for addressing sexual assault and its impact on our community.

One unanswered question is whether the university will schedule a last-minute competing event at the same time Will is speaking, intended to diminish attendance at his speech.

That was the tactic taken by Brown University following an uproar over a debate between two feminist scholars on the campus response to sexual assault.

Read the Inside Higher Ed story.