Today’s clamor over identity—the authentic scream by so many for answers to questions about where they belong in the world—did not spring from nowhere. It is a squalling creature unique to our time, born of familial liquidation.

Post-1960s levels of fatherlessness, divorce, shrinking families, and abortion, among other trends, have become major impediments to the understanding of self. So many people seem to have lost their very selves, with the result that Western polities and societies now resound with languages of loss, fury, and rancor. 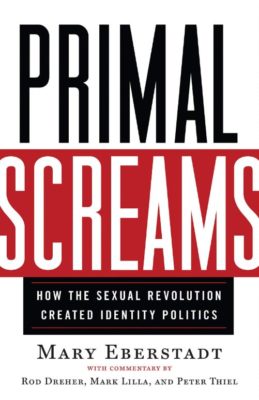 Consider a phenomenon especially baffling to people who are not part of identity politics: the widespread and seemingly inexplicable frenzy over “cultural appropriation.”

According to Oxford Dictionaries, this is “the unacknowledged or inappropriate adoption of the customs, practices, ideas, etc. of one people or society by members of another and typically more dominant people or society.”

One emblematic eruption over “appropriation” occurred at Yale University in 2015, when the university’s Intercultural Affairs Committee preemptively asked students in advance of Halloween to avoid certain costumes that might offend. In response, faculty member Erika Christakis offered a mild demurral, suggesting in an email the logical consequences of such a policy (e.g., that it might bar blonde toddlers, say, from dressing up as Asian characters in a Disney film).

Her dissent sparked a protest letter signed by hundreds of students, an ugly public confrontation between menacing students and Christakis’s husband, a social media campaign against them both, and headline news.

And Yale’s costume controversy has been only the most visible example of the weaponization of dress-up. In 2015, the president of the University of Louisville issued a public apology after it was revealed that he and a group of friends had worn sombreros and other Mexican-themed attire. Surveying costume parameters handed down lately by authorities at Tufts University, one writer summarized how far restrictions now extend, noting that “students who heed the above guidelines are presumably restricted from dressing up as samurais, hombres, geishas, belly dancers, Vikings, ninjas, rajas, French maids, Bollywood dancers, Rastafarians, Pocahontas, Aladdin, Zorro, or Thor.”

Again, to perplexed bystanders who think a bongo drum is just a bongo drum and that tacos can be enjoyed by everyone, the cacophony over cultural “ownership” makes no sense. That’s why those who protest along these lines are written off as “snowflakes,” say, or as the supposed products of “helicopter parenting” (i.e., spoiled brats).

But what if the truth lies somewhere else—in a different direction from “coddling” theories?

What critics of identity politics have missed is that the manifest panic behind cries of cultural appropriation is real—as real as the tantrum of a toddler. It’s as real as the developmental regression seen in the retreat to “safe spaces” on campus, those tiny ersatz treehouses stuffed with candy, coloring books, and Care Bears. It’s as suggestive as the pacifiers that were all the rage as campus accoutrement a few decades ago.

In social science, the toddler’s developmental “Mine!” is known as the “endowment effect”—the idea that human beings ascribe extra value to possessions in virtue of the fact that they are theirs. Some scholars also see in the endowment effect a variation of another human proclivity: loss aversion.

The evidence is impressionistic. But maybe that cultural scream of “Mine!” is coming from people who did have something taken from them, whether individually or collectively—only something more substratal than the totemic objects now functioning as figurative blankies for lost and angry former children. Maybe the furor over appropriation unveils the true foundation of identity politics, which is pathos.

The outsize agitations over what’s “Mine!” are also uncannily suggestive of sibling rivalry, in which a younger one struggles with an older, “dominant” sibling for possession of a toy. The court of public opinion in which these increasingly frenzied controversies now play out is, in effect, the figurative parent to whom the weaker sibling appeals for equity.

It is not only the language of cultural appropriation that conjures the familial point. The regression to a childlike state can be found all over the dialects of identity politics.

This includes those of the alt-right and racialist European-firsters. “Mine!” is the primal cry, for example, of the white nationalists yearning for an “ethnostate.” Studies at the University of Virginia turned up another finding that is grist for the mill of this book’s thesis of a link between domestic dispossession and indentitarnism: white nationalists are much more likely to be divorced than married or never married.

For another example of infantilism in identity politics, recall the mentions earlier of the bizarre behavior of protestors at various controversial public talks—the crying, the chanting and stomping, the seeming inability in case after case to respond to authority and reason. One more instantiation was an outburst that greeted Jordan B. Peterson at McMaster University in 2017. Like other speakers subjected to such abuse, he commented afterward on the wrongs done to the cause of free speech by people with a bullhorn chanting the same repetitive interruptions. Once again, though, free speech was not the only public good being imperiled. Video of the event captures scores of people screaming and chanting nonstop, almost entirely in monosyllables—a spectacle less reminiscent of a civil rights protest than of, say, the menacing one-word chants of the frenzied in chapter 9 of Lord of the Flies.

In sum, the chronic regression to preadolescent language and behavior is testimony to something important about identity politics: its prerational origins.

In October 2018, following the confirmation of Supreme Court Justice Brett Kavanaugh, a Democratic political consultant delivered a raw and widely read exercise in identitarianism called “White Women, Come Get Your People.” Most remarkable was its final image, in which the author described being unable to hear talk of “due process and some other nonsense” due to her “rage headache.” Such is the very incarnation of a toddler tantrum, complete with fingers in ears, ignoring adult conversation.

Identity politics is prepolitics. But it is not only a pediatric tantrum. To those who can no longer find their selves through the usual means, it is also a survival strategy for a postrevolutionary world.

Something has been taken from me and my people, a wrong that my leaders must right: that is the unspoken shared refrain. In the same way, the term “woke” of the progressive left and the term “red pill” of the alt-right are words from different glossaries, describing the same epiphany: the moment at which one found the figurative family/community to do what literal families/communities of earlier times did by default (i.e., have your back, surround you with like-minded sympathizers, and explain the world and your place in it).