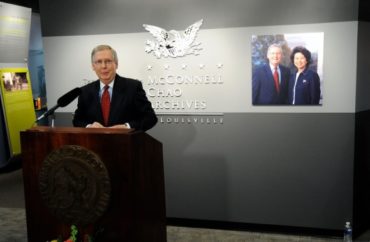 A gallery hosted within the University of Louisville library has come under fire by some students who suggest its main focus — Mitch McConnell and Elaine Chao — make some feel “unwelcomed” and “uncomfortable.”

What’s more, according to a petition circulating among the campus community, the “McConnell Shrine” upholds the notion that the “university supports the idea that only the lives of those with power and money deserve to be archived.”

At issue is the “Civic Engagement Gallery,” part of the archives of the Republican power-couple Senate Majority Leader McConnell and his wife, U.S. Secretary of Transportation Chao. McConnell is an alumnus of the school.

“We urge you to sign and declare support for the repurposing of the McConnell-Chao Archives Civic Education Gallery and restoring the library’s control over the space,” states the petition, started by students Bayne Lutz and Syann Lunsford, both of whom did not respond to requests from The College Fix seeking comment. 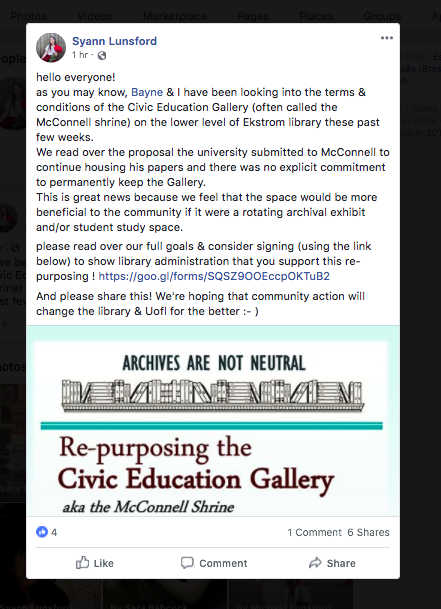 An earlier version of the petition, a screenshot of which has been retained by The College Fix, stated that “dedicating a space on campus to idealize a man who actively votes to take away the rights of immigrants, women, the LGBTQ+ community, people of color and low-income citizens sends the message that our university and library do not care about under-represented groups, diversity, inclusion or equality.”

However, after The College Fix’s media requests, the petition was altered to tone down its rhetoric.

Sen. McConnell’s office did not respond to emails and a phone call seeking comment.

In its current version, the petitioners emphasize they are not seeking to abolish the McConnell-Chao Archives altogether, simply repurpose the 7,000-square-foot Civic Engagement Gallery that is part of the exhibit. The petition claims “the space makes multiple communities feel unwelcomed and uncomfortable … ”

They also argue the gallery is underutilized space that could be better used. In reference to the gallery’s goal to “create a greater awareness and appreciation for primary sources and their importance in documenting the past to understand the present,” the petitioners argue “students, staff, nor faculty use this space for its explicit educational purpose, while others do not know that it exists.”

They suggest instead to transform the space into a student study area, or, perhaps display the Louisville Underground Music Archive or an LGBTQ+ item collection center, or a lounge for library staffers.

In a museum-like sphere, the Civic Engagement Gallery highlights the careers of Sen. McConnell and Secretary of Transportation Chao by showcasing personal items and memorabilia from both government figures.

As an interactive educational facility, the gallery is “designed to educate visitors about American government, history and politics” through a biographical lens.

Visitors can take mock citizenship tests, learn more about American history and the Constitution, or watch an educational films on either the history of the Senate or Sec. Chao’s rise from immigrant roots to working in the White House.

Opening its doors in 2009, Sen. McConnell picked his alma mater to preserve and archive an array of items and documents at U. Louisville’s Ekstrom Library and both he and Secretary Chao continue to add to the archive.

McConnell chose the public university with the hope it “will help to educate people about the importance and the purpose of Congress, and the value of our two-party system,” he said.

The gallery aims to act as an outlet of inspiration for visitors to answer the call to civic engagement. During his remarks on opening day, the senator said “it’s my hope that learning about Kentucky’s past and the ideal of public service will lead many more people young and old to realize that they have a say, and a stake, in the future of Kentucky and our nation– so that at some point in their lives, they can feel at the end of the day … that maybe they’ve made a difference.”

If campus leadership accepts the petition, the activists say they are prepared to fundraise to bring the re-purposing process into fruition. If rejected, they say they are equally prepared to “protest” the library as well.

In an email interview with The College Fix, speaking on the future of the Civic Engagement Gallery, U. Louisville’s media relations Director John Karman III stated that “there are no plans for any changes at this time.”