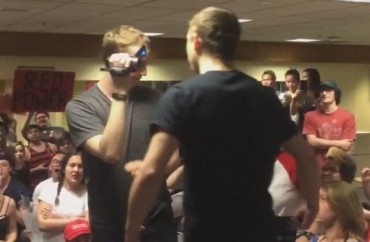 “It was utter chaos at Portland State University Thursday evening, as over 100 wackjob commie students crashed the forming meeting for Students For Trump,” reports Progressives Today:

Fights nearly broke out, doxing and vandalism threats were issued to Trump supporters, Latino students were shoving the Trump students out of the way, another student encourages others to join anti capitalist groups, they shut down and silenced the pro Trump group, mocking their talking points, whined about TRUMP chalk on the sidewalk, and it ends with the socialist students gloating about shutting it down and promising to come back if Students For Trump holds another meeting.