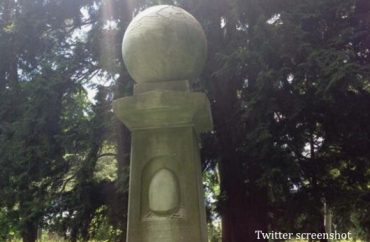 A committee at Williams College charged with reviewing historic works of art for their appropriateness to modern times and impact on today’s campus climate is currently reviewing a monument at the school that honors Christian missionaries.

This is the second time this year the college’s Committee on Campus Space and Institutional History has reviewed controversial works of art at the private liberal arts college in Massachusetts.

Earlier this year it reviewed a mural depicting Native Americans that some viewed as stereotypical and offensive. While the committee reviewed the mural, it was covered up. Ultimately, in May, the group recommended a caption be installed to put the painting in context.

Now the Institutional History group, made up of faculty, students and others, is considering the Haystack Monument at the 223-year-old college.

Erected in 1867, the 12-foot tall marble monument honors former students who “conceived of the idea to found an American missionary movement focused on spreading Christianity worldwide,” according to the university’s website.

Kevin Murphy, a member of the committee and senior curator of American art at Williams College Museum of Art, said the Haystack Monument denotes where four Williams students decided to establish what became the American Board of Commissioners for Foreign Missions.

“At the time, Williams had a strong emphasis on Christianity and it was common for graduates to become ministers,” Murphy told The College Fix via email. “Now we are an institution with students and faculty from lots of different faiths or no religious belief at all, and no longer have mandatory chapel attendance.”

“So the question becomes how do we create context for the Haystack Monument? If students visit it at all, it’s as a convenient place for social gatherings,” Murphy said. “The history of missionaries is also difficult to separate from American and European colonial expansion, a fraught topic, but one that offers productive areas for discussing historical and current attitudes to (primarily) non-Western cultures.”

He added that Christian groups not affiliated with the college but with connections with missionary organizations visit the monument, so the committee is grappling with “how do we balance our responsibility to past and future students, to the college and the public?”

#Haystack Monument is a #landmark that I will never forget. A Day of #Global Impact pic.twitter.com/fjTyjVIyrr

At this point the committee has not submitted any recommendations yet with regard to the Haystack Monument, Murphy told The College Fix last week.

“[W]e are trying to come up with guidelines that ensure the relevance of The Haystack, and other spaces and monuments, to Williams today and in the future,” he said. “It’s not going anywhere, so I personally think it should be an active participant in how we understand the college’s role in American and world history, and religious education.”

The committee was developed last year to consider historic paintings at The Log, a popular hang out near campus. One mural in particular prompted alarm from some in the campus community – and was covered up while under review.

The artwork is a World War II‐era mural that depicts Colonel Ephraim Williams and a Mohawk leader before they were both killed in “the Bloody Morning Scout” at the Battle of Lake George in 1755, according to the committee.

“Some members of the Williams community raised concerns that the mural portrayed Native Americans stereotypically and in its image of the relationship between the British and Mohawks misrepresented the history of that relationship. These concerns, in turn, raised questions about whether the room felt like an inclusive space to diverse groups of students,” the committee stated.

Williams President Adam Falk, in announcing the committee’s formation, explained in an email to the campus that “because the mural portrays the Mohawks in a way that is potentially problematic, I have instructed that it be temporarily covered while the committee considers the larger questions with which it is charged.”

In May, the committee recommended the mural remain in place, but be accompanied by a caption describing the historical event depicted in the mural, as well as additional contextual information about The Log’s artwork and the campus conversation over it.

For Murphy, the committee’s goals address the question of “what the present owes the past.”

“Secondarily, I’d say it’s the idea of who ‘owns’ the college, current students or alumni? Williams is in a relatively unique situation in that over the course of about five years in the late 1960s it abolished fraternities that had been the center of social life and began admitting women,” he told The Fix. “Alumni from before those events have a strong attachment to a place that was much different than they remember. And for alumni after 1970 and for current students it’s hard to build a connection to what was may as well have been another college. Some of the most invective rhetoric around the Log murals was from alumni, not students.”