My jaw dropped recently as I read the nine-page syllabus for an online history class I enrolled in for the fall semester at the University of Kansas. Two full pages of the document include arguments against the Second Amendment and chides students who support the university’s concealed carry policy or take advantage of it.

To be clear, this class is on the history of the Japanese Samurai and has nothing to do with U.S. history or the Second Amendment.

What’s more, Professor Eric Rath of the History and East Asian Studies departments also informs students in the syllabus: “With guns allowed on campus, I no longer feel safe having visitors in my office; so instead of in person office hours, I am available for consultation via email or Skype on the hours indicated above and by appointment. Should you wish to meet in person, the appointment will be at a secure or public location of my choosing, but not my office. Please read the statement about concealed weapons at the end of the syllabus.” 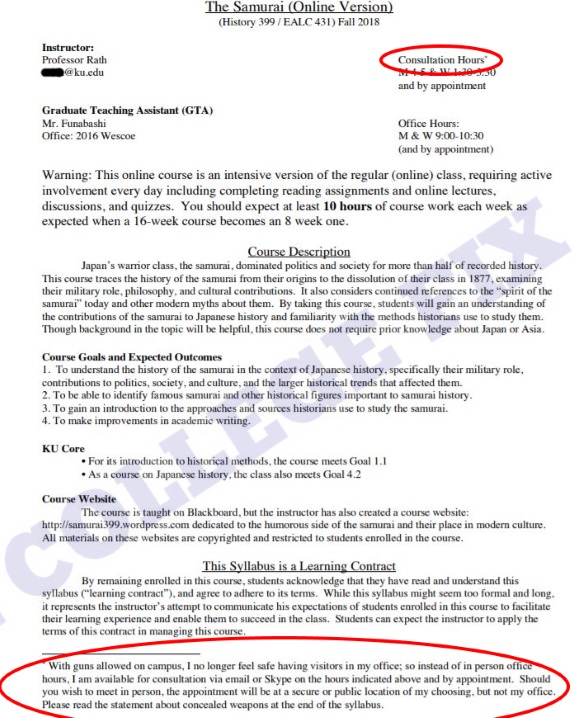 The two-page statement includes data that aims to paint the use of guns in a negative light, details provisos of the policy at KU that allows students and faculty to carry concealed weapons on campus, and states “I request that you not bring firearms to class or wherever I am present.”

“Although you may be entitled by law to carry a gun, I urge you not to do so. … I do not want to worry about whether you might react by pulling a gun on me, or whether you might have an improperly secured weapon in your belt or bag,” the syllabus states. “… I have seen students become uncontrollably angry because of something that has happened in the course—a disappointing grade, an allegation of academic misconduct, an uncomfortable topic, a controversial statement. If you do not carry a weapon, you cannot be tempted to use it in a moment of frustration.”

As someone who is in the process of obtaining a concealed carry permit, I find my new professor’s anti-Second Amendment syllabus screed to be over-the-top and a predictor of the bias I can expect to receive in this class. I am not interested in taking a class on the Samurai, Japan’s most prevalent warring class, from a professor who does not value citizens’ rights to protect themselves.

It’s a very disappointing turn of events. I was really looking forward to taking the online course because I find the topic fascinating. Now I may drop the class because my professor believes anyone who supports or engages in the concealed carry policy at KU is apparently a threat to his life.

I wonder if Professor Rath is aware crime on campus is down in the wake of the policy?

“KU Public Safety officials said crime on the Lawrence campus declined 13 percent from 2016 to 2017. In the first six months of permitted concealed guns on campus, there have been no criminal weapons violations,” the Kansas City Star reported in March. “KU Public Safety attributes the drop in crime to steps the university took to improve campus security after the legalization of concealed carry.”

That’s one take. Or perhaps criminals intent on violence head to gun-free zones and tend to avoid places where they know people can defend themselves.

There is one thing I do agree with Professor Rath on.

His syllabus states: “If you choose to carry a gun, you have the ethical responsibility to obtain the necessary training to do so in a safe manner, even though Kansas law does not require it. In order to assess potentially dangerous situations accurately and use a firearm effectively, you need to complete extensive firearms training, such as that provided to military and law enforcement personnel. Without such training, constantly maintained, you are more likely to cause injury to yourself or an innocent person than to provide anyone with protection, including yourself.”

I have undergone firearms training, most recently an eight-hour concealed carry class with Susan Hutchcraft of Not A Victim LLC based in the Kansas City-area. Her class fulfills the requirements that an individual needs to pass to obtain a conceal carry permit in both Kansas and Missouri. The permit is not required to conceal carry in the state of Kansas, but affords extended rights to those who have it, including conceal carry reciprocity across many state lines and the ability to conceal carry within 1,000 feet of a K-12 public school building. Hutchcraft is a subject matter expert and a law enforcement professional who, aside from her day job, also runs her own business dedicated to teaching people how to be responsible firearms owners.

My professor believes he can restrict my gun rights because he is in a position of authority, but I do not leave my constitutional rights at the schoolhouse door. 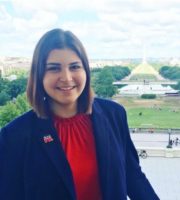