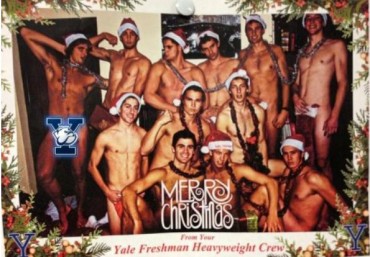 Getting naked, or just barely, in the name of charity or just plain fun is the latest trend on college campuses across America. Whether it’s a 5K run in bras and panties, posing in the buff for a fundraising calendar, or taking a Christmas card photo with Santa hats on and little else – coeds are getting naked nationwide.

More and more coeds, in fact.

Case in point: Arizona State University’s “Undie Run” Facebook page has more than 16,000“Likes,” and the upcoming run this year is already packed with pledged participants.

At the annual ASU run, female coeds don some of their best lingerie and their male counterparts don their own tighty whiteys. It draws thousands and has been described by at least one student as “a little freaky,” according to a local news report. The effort aids a variety of charities.

Similarly, the annual Nearly Naked Run at Boston University is so popular it had to change to a larger venue. It’s billed as a chance to “Undress, De-Stress and Do Good,” according to its Facebook page. The effort collects clothes for the homeless.

At Washington University in St. Louis, about 40 students took part in its inaugural Nearly Naked Run in December to raise money for an arts outreach program for underprivileged youth. Students ran around the campus in their underwear, sports bras and little else.

Many other campuses across the nation offer similar excuses to strip down for charity. But fun runs aren’t the only show around.

Yale University Men’s Freshman Heavyweight Crew in December took a Christmas card team photo in which they wore nothing but Santa hats and big grins, holding stockings over their privates.

Across the pond, both the male and female rowing teams at the UK-based University of Warwick took nude photos of themselves in which they were cleverly positioned or used props to show nearly everything, stopping just shy of the Full Monty, although there was plenty of buttocks to go around. The pictures, published in December, were taken to fundraise for their athletic programs as well as raise money for charity.

While some applaud the efforts or simply brush them off as youthful fun, others argue it’s an example of the sexualization of America’s youth and an abandonment of modesty.

Colleen Carroll Campbell, a prominent conservative commentator, said in an interview with The College Fix that these students have been raised in a sexualized culture and “absorbed its messages all too well, mistakenly equating exhibitionism with liberation and objectification with positive attention.”

The efforts are also misguided, added Campbell, a journalist, EWTN host, former presidential speechwriter, and author of “My Sisters the Saints: A Spiritual Memoir” and “The New Faithful: Why Young Adults Are Embracing Christian Orthodoxy.”

“College students have been pulling silly stunts and shocking pranks for generations, so that’s nothing new,” she said. “What is new, perhaps, is to try to recast group stripteases as evidence of altruism – as if scampering in your undies is somehow more selfless than serving in a soup kitchen, tutoring struggling students or helping build new homes for low-income families.”

She also questions whether students have thought longterm about their actions.

“This trend probably won’t be one that wears well,” Campbell said. “Romping in the nude may feel exciting when you’re 20, but when you’re 30 and job hunting – or spouse hunting – and trying to explain those compromising online photos, it’s another story.”

Fix contributor Judith Ayers is a student at York College of Pennsylvania.