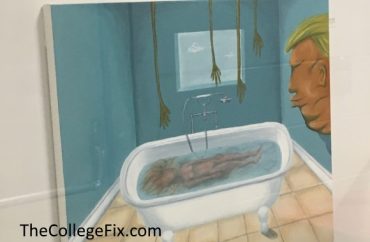 Exhibit, in response to Trump, raises funds for Planned Parenthood

A sketch of a naked woman, spread eagle, her menstrual cycle spilling out over the floor.

A painting of a drowning naked woman in a bathtub under leaching hands dangling from the ceiling, with what appears to be Trump’s profile sneering down at her.

A drawing of a woman blowing her brains out with two fingers drawn into something akin to a pistol.

These are examples of student artwork pieces that greet visitors to the University of North Carolina Chapel Hill’s SAMple Gallery, billed as an student-run “alternative arts space.” The current exhibit, called “Nasty Women,” seeks to serve as a “response to increasing threats to the individual and collective rights and safety of all female-identifying folks” and to “demonstrate solidarity among artists who identify with being a Nasty Woman,” according to organizers.

It’s related to a larger “Nasty Women” art exhibit launched in New York City in January after Trump’s election. The exhibit served “as a fundraiser to support organizations defending these rights and to be a platform for organization before the Trump Presidential Inauguration in January,” NYC organizers stated.

The SAMple Gallery at UNC-CH envisions a presentation of multidisciplinary ideas in the presence of risk and experimentation as a vanguard of culture. The installation in Queens curated works of like-minded artists from around the world with the hopes to bond together as a victimized unit and spread their “nastiness” as retaliation against the wave of perceived threats to women’s rights.

Junior at UNC-CH Adelle Bortz said that this marginalization of women expressed through art has seemingly become a norm. As a major in art history, Bortz said that artistic political commentary has historically existed in many forms.

“It’s become a battle for people that feel like their voices will be ignored under the patriarchy of the Trump administration,” Bortz told The College Fix.

Perhaps the array of expressions “So bad,” “So rad,” “So mad,” and “So sad” — another of the pieces at the UNC gallery — encapsulates the modern day malcontent surrounding the new administration.

A sign against the bottom of the wall says “Resist” in bold red font, which seems to give clarity to the message the collection of lifeless or unfiltered women aims to manifest.

The group exhibition was posted on a variety of Trump resistance platforms that organize nonviolent protests to the recent events in America, including resistandprotest.com.