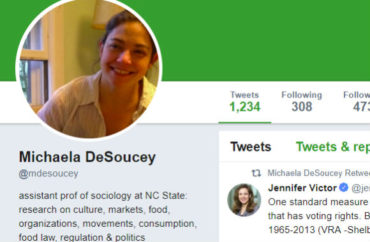 ‘We consider this matter closed’

North Carolina State University stayed dark this week as a handout from one of its sociology professors, Michaela DeSoucey, went viral.

It recommended that her students block Fox News on their parents’ televisions, among other advice that skews to the far left.

The taxpayer-funded university has finally spoken, but now it’s hiding the professor’s alleged “apology” for the handout.

WRAL reports that DeSoucey’s boss said she has “reflected on her actions and realized she had crossed the line between educating and advocating.”

Jeffery Braden, dean of the College of Humanities and Social Sciences, wrote in a statement that DeSoucey “has apologized, and we have have accepted her apology. We consider this matter closed.”

NCSU media relations has yet to respond to a College Fix query Tuesday asking to confirm that the handout, which didn’t have a name on it, came from DeSoucey, and explain the context of it. It did not immediately respond to another query Thursday in light of the WRAL report.

DeSoucey’s Twitter account was protected when The Fix viewed it Tuesday, but she appears to have taken it down completely as of Thursday afternoon. Her faculty page with full contact information and course schedule remains posted, however.

The assistant professor says her research and teaching center on “how relationships among markets, social movements, and state systems shape the cultural and moral politics of food.” She has been with NCSU for six years.

The handout was first posted by a Twitter user Monday afternoon who said it came from “my friends [sic] sociology professor at NC State.”

This was handed out by my friends sociology professor at NC State hahahahah my favorite is “block Fox News from your parents TV when they’re not looking” pic.twitter.com/XSxdg85s2d

It was titled “Things you can do (now or in the near future) – a somewhat cynical list.” The handout starts mundane, telling students to vote and get involved with political campaigns they support, but quickly veers into controversial territory.

It said President Trump is attacking the “free press” when he blames “fake news,” and DeSoucey encouraged her students to follow “real news” from mainstream and left-wing media outlets.

She recommended they also follow many politicians, pundits and scholars on Twitter, one of which is a known conservative but also vocal Trump critic, Bill Kristol.

“When they’re not looking, set the parental controls on the TVs of your family members to block Fox News,” the handout continues:

Using a straw-man argument, she told students to “use good comebacks” and shut down people who object to harassment of those with differing views:

If you hear people try to argue that yelling at a politician at a restaurant or in an elevator is equal to murdering people at their place of worship, stop that ill-informed and crappy ‘both sides’ argument in its tracks.

DeSoucey concludes by telling students to demand their friends, families and acquaintances “stop calling the police on people for being AWB (alive while black … these ridiculous 911 calls need to stop immediately.”

WRAL said DeSoucey’s handout sparked backlash across campus, though some students said they knew where she was coming from. Dean Braden refused to answer whether she would be sanctioned.