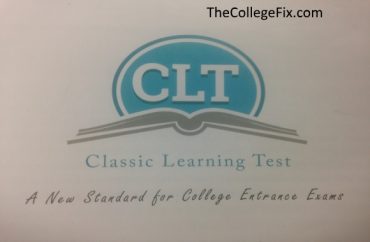 A new college entrance exam focusing on classical liberal arts education serves as an alternative to the ACT and SAT while linking students with a number of conservative Christian universities.

The Classic Learning Test (CLT) debuted in June with a few factors contributing to its creation, CEO Jeremy Tate said in a phone interview. One component, Tate said, was the SAT’s alignment with the Common Core last year.

A former college counselor, Tate said parents at his high school were upset with the standardized test’s movement toward the controversial standards. His discussions with admissions workers at small liberal arts colleges also signaled there was a need for a new test.

Adding to the mix was Tate’s personal thoughts on the two major college entrance exams.

“Tests teach, they don’t just evaluate,” he said. “And I thought what was being taught on the SAT and ACT didn’t necessarily correspond to a Christian or Catholic worldview and in some ways, it seemed to undermine that.”

MORE: Common Core advocates push for its use in college admissions

The exam’s parent company, Classic Learning Initiatives, was co-founded by Tate and David Wagner in fall 2015. They created a two-hour online test that prospective college students can take at a local testing center.

Scheduled on five dates per year, the test includes 120 questions and uses a 120-point scoring system. The test’s three sections – verbal reasoning, grammar/writing and quantitative reasoning – include 40 questions each. With an emphasis on classical education, the reading and writing sections include selections on religion and philosophy as well as historical founding documents.

Tate said the SAT and ACT’s promotion of globalization has eroded loyalty to any particular cultural or intellectual tradition. The CLT counters that.

“We believe as citizens to the West, our students would be good to have the kind of literature that my grandpa and great-grandpa grew up on, and that was kind of common knowledge. I think we’re losing that,” he said.

While the test seeks to show students’ readiness for college, Tate also hopes the test’s standards will encourage classical literature to be brought back into high school classrooms.

So far, the CLT has partnered with 37 colleges and universities. They include Christian and conservative institutions like Grove City College, Liberty University and Patrick Henry College.

The test’s number one selling point, according to Tate, is that “it’s just a better test.” Having formerly prepped students for the SAT, Tate said the “value-neutral” approach of that test left students telling him it was “so painfully boring.”

MORE: Common Core is pushing morality discussions out of the classroom

“Instead of putting kids in front of meaningless informational texts, we want to put them in front of the greatest thinkers in the history of Western thought,” Tate said.

But the test also fills a void, linking students to small liberal arts universities. It’s a niche the exam is glad to fill. There aren’t plans to expand to large public universities.

Those schools already have plenty of students, Tate said, and there’s a reason. He said the ACT and SAT’s push of science, technology, engineering and math education has served as a powerful matchmaker for major universities, which has had a significant effect on traditional liberal arts universities.

“We’re seeing that a lot of these colleges I’ve been talking to, some of them are having enrollment problems … because we had a generation of students who think there’s no value in a liberal arts education,” Tate said.

The CLT hopes to have the opposite effect, by matching students to liberal arts schools. It’s that type of education that some of America’s best employers are looking for, Tate said.

MORE: Students are wising up to mandated standardized tests