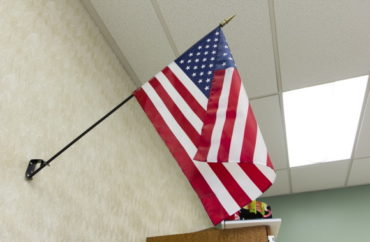 The Fargo, North Dakota School Board voted this past week to stop beginning its sessions with the Pledge of Allegiance citing “under God” as the reason.

Board member Seth Holden claimed those two words do not “align with the school’s diversity, equity and inclusion values” Inforum reports.

The fact that “God” is capitalized, Holden said, means it’s “clearly referring to the Judeo-Christian god” and as such “does not include any other face such as Islam, Hinduism, Buddhism.” He added that atheists and agnostics also are excluded.

Board President Tracie Newman added that, while she didn’t have a strong opinion on the issue, the Pledge may not be “a useful way to begin every one of our board meetings.” She said she’d prefer to open sessions with “a shared statement of purpose that would bring us all together … ”

Board members Melissa Burkland and Katie Christensen agreed with Newman.

Robin Nelson, a school board member, said that the new motion has created a lot of unwanted strife within the community, especially ahead of the new school year.

She believed the board should focus on the education of the students, but also should be awarded the right to recite the Pledge of Allegiance at the meetings.

Nelson wasn’t the only one who thought the Pledge of Allegiance should be a part of the meeting.

Four members of the community came to plead their case to keep the pledge in the meetings, including Paulson, who said he originally made the motion after learning numerous city and local governments and school boards say the Pledge of Allegiance.

“We are misinterpreting the Pledge of Allegiance,” Paulson said. “The pledge isn’t a show of our patriotism, it’s an affirmation of our commitment and our loyalty to the greater cause, and that greater cause is freedom.”

The vote to ditch the Pledge was 7-2. The Fargo board had begun every meeting since March with the Pledge after passing a motion to do so.

Despite his remarks Holden said he wasn’t “trying to get rid of” the Pledge, according to the report.

The Fargo (ND) School Board voted to stop saying the Pledge of Allegiance at meetings because it's discriminatory ("under God") and untrue ("liberty and justice for all").

Here's board member Seth Holden's excellent case against the Pledge.

MORE: Teacher repeatedly kneels for Pledge of Allegiance, gets ‘reassigned’