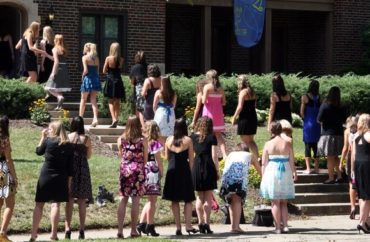 A group of students at Northwestern University, including fraternity and sorority members, want to see the abolition of Greek life on campus.

Advocates for abolition accused the Greek life system of promoting elitist and racist attitudes, according to an anonymous Instagram page that publishes stories about the fraternity and sorority system at Northwestern.

The Instagram page called “Abolish NU IFC/PHA [Interfraternity Council/Panhellenic Association]” started posting on July 22, sharing stories of students and their complaints about Greek life at the private university in Illinois.

The Interfraternity Council represents fraternities at Northwestern and the Panhellenic Association represents sororities.

“The Interfraternity Council and the Panhellenic Association are complicit in perpetuating harm. We must abolish these organizations which are embedded with racism, sexism, homophobia, transphobia, and classism,” the initial post stated.

We are following in the footsteps of our peers at other universities to demand the disbanding and dismantling of institutions which perpetuate harm against marginalized groups. All organizations under the Interfraternity Council (IFC) and the Panhellenic Association (PHA) at Northwestern University are complicit in this violence. We are calling upon the entire Northwestern community to share their thoughts on and experiences with Greek Life. We especially encourage submissions from BIPOC, LGBTQ+ and low-income community members.

The page shares stories allegedly from students and alumni, many of whom are current or former Greek life members.

“This is a pivotal moment for the students that benefit from the privilege Greek life thrives on to assess why they joined and work to bring this institution to an end at Northwestern,” one post stated.

One student shared their story of discrimination, saying that at a frat party with mostly white students, they were asked to leave because they were “making others uncomfortable.”

“The sheer fact that a POC showing up made people uncomfortable goes to show that frats cannot be reformed,” said the complainant.

Another post said that Greek life won’t be abolished because alumni protect it since it “benefits the white and the wealthy.” One story accused Greek life members of getting to “profit off of a system that marginalizes others for your benefit.”

The page declined to comment to The College Fix. It did not respond to a follow-up question about if the page organizers are students.

However, discussions on campus about abolishing Greek life had occurred even before the Instagram page started, according to the student newspaper the Daily Northwestern.

All 12 of the sororities in the Panhellenic Association and at least 3 of the 18 fraternities in the Interfraternity Council have had debates among members surrounding the issue of abolition and the implications of such a decision, it reported.

In late July, “the Panhellenic Association had a meeting with chapter presidents about the issue of abolition. And some fraternities have also discussed disbanding their presence on campus,” the Daily Northwestern reported.

The national organization has to approve the disbandment of a campus chapter, according to the student paper.

“Greek organizations have already seen deactivations this past month,” it reported based on a source within the Panhellenic Association.

However, the president of the Interfraternity Council at Northwestern said that he has not seen a drop in membership.

Jayden Logan, the IFC president, told the Daily Northwestern that the presidents of Northwestern frats would be discussing at the end of July what abolition of IFC would look like.

Logan did not provide comments to The College Fix. A scheduled phone interview and subsequent follow-up attempts fell through.

Zana Rashid, a spokesperson for Northwestern’s Panhellenic Association, confirmed to the Daily Northwestern that it is discussing abolition with its chapters and members.

Rashid did not respond to several requests for comment from The College Fix.

The student affairs department’s Greek life office did not respond to a request for updated demographic data.

Northwestern University did not respond to multiple requests for comment from The College Fix.