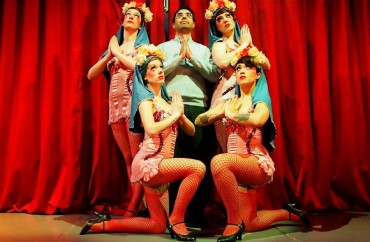 From the “You Can’t Make This Stuff Up” file:

Participants in Northwestern University’s “Northwestern Burlesque” show have expressed concerns that those who have been chosen for solo and small group performances “do not sufficiently represent different races, body types and experiences.”

Burlesque co-director Avril Dominguez said that after the selections were made for those slots, criticism began on social media and emails stating that “marginalized experiences were not sufficiently represented in the selected acts.”

“It was brought to our attention that there are people in our community who feel that those solos and duets and trios are not best representing what the Burlesque community is,” Dominguez said. “We do have a very inclusive and representative cast at large (and) we’re taking that criticism into account and really trying to reestablish a safe space.”

Not so ironically, Dominguez uses the very same terminology – “safe spaces” – that the college’s president, Morton Schapiro, defended in a recent newspaper column.

Some members did decide to leave NU Burlesque’s cast, said [Genesis] Garcia, who added that she had also considered leaving because she could see that other people had been negatively affected by their experiences with the show. She said she ultimately stayed because she felt the cast was working to actively to address the concerns.

Dominguez and co-director Alaura Hernandez emphasized, however, they stand by the individual and small group performances they had selected prior to the complaints, which Hernandez said reflected a wide range of viewpoints, styles and experiences.

“People are upset because they don’t think we have diversity in our small groups, but they don’t know the people who got solos — all they see is a name, so they might have made an assumption based on those names,” the Medill senior said. “We see the diversity in our acts because we saw the auditions, but it’s not our place to broadcast what these acts represent.”

That role, said assistant director Victoria Case, belongs to the performers themselves.

Another co-director, Lauren Hamilton, said that although they’ve never had to address these concerns before, it doesn’t make them “any less valid.”

“It’s very important that we are always consciously thinking of deliberate ways to uplift people that are not uplifted in society,” she said.

Co-director Hernandez noted that after the brouhaha, the directors “worked on restructuring the show to allow more time for solo and small group performances and opened up a second round of auditions for those acts.”

“It’s upsetting to us that people not getting a solo or small group piece makes them feel excluded from the Burlesque community,” she said.

That may be, Ms. Hernandez; however, you’d be doing them a big favor if you had held fast. A Broadway director, or better yet, an employer isn’t going to care one whit about some snowflake’s feelings of “exclusion.”

No word yet on whether those who were cut from Northwestern’s various athletic teams want their tryouts “restructured” and/or another round of tryouts scheduled.