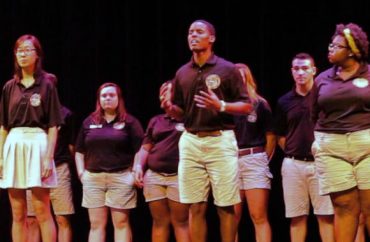 Shifting the narrative at ‘Summer Welcome’

Freshman orientation leaders at the University of Missouri have a tough job on their hands.

With new enrollment plummeting and existing students leaving the university in unprecedented numbers in the wake of last fall’s student race protests, there is pressure to register as many freshmen as possible.

Mizzou’s “Summer Welcome” leaders have apparently decided the best way to convince accepted students to enroll is to bombard them with talking points and politically correct vocabulary about what happened last fall – and what is likely to happen daily on the protest-happy campus.

They performed a skit for prospective students Tuesday, recorded by The College Fix, that used last fall’s “peaceful protests” – led by Concerned Student 1950 – as a selling point.

It was the 19th performance of the summer, with four more to go.

Activists are being shamed because they ‘care about the future’

The protests against “oppression,” “racism” and “hate” were necessary to ensure that incoming students do not have to face racism, leaders said.

And the students who started it all are being wrongly “shamed because they care about the future and culture of Mizzou.”

“If you weren’t here, you don’t know what happened,” says leader Emily Hartung-Gilbirds to an auditorium of about 200 prospective Mizzou students. (See transcript below)

“We are not crybabies,” said Jasmyn Barr. “We are adults who realize that we will face many adversities in our lifetime…”

Picking up on Barr’s hanging sentence, Parker Donovan finished: “We have the power and the voices to change it here on our campus.” Social justice activists told the Columbia Missourian in May that Concerned Student 1950 showed up and left a “mess,” marring the work they had been doing “in the background since September to increase equity” at the school.

One of those rival activists, former Graduate Student Association President Kenneth Bryant, told The Fix that he did not find the Summer Welcome spiel to be “problematic,” however.

An exodus of new and current students

Mizzou is expecting to have 2,600 fewer students enrolled this fall, up from an expected shortfall of 1,500 students projected in February, according to estimates released in May. Only 1,400 of those students are freshmen.

The April prediction by interim Chancellor Hank Foley, that retention of existing students “may take a hit as well,” has seemingly come true. This year the Legislature increased state funding of the university by $9 million, which will hardly mitigate a revenue loss exceeding $46 million.

Foley instituted a hiring freeze in March, which was followed by a series of layoffs that hit cleaning and maintenance staff as well as academic departments.

The protests seem to be be hitting the university hard. So why bring up the protests at all?

“During the summer questions come up about what happened on campus,” Shelby Anderson, communication chair for the Legion of Black Collegians, wrote on Twitter last month. “This is how the SW leaders address it every night” in their skits.

MORE: Mizzou’s own diversity czar says demands are against the law

During the summer questions come up about what happened on campus. This is how the SW leaders address it every night pic.twitter.com/Msof4dgAGH

JAYLYN JOHNSON: All of those football players should definitely lose their scholarships.

DANIEL LITWIN: Mizzou? That racist school? I’m not going there.

KAYLA MYERS: There they go protesting again. Those students are ruining our school.

ASHLEY YONG: They’re all nothing but a bunch of crybabies bullying people into getting what they want.

EMILY HARTUNG-GILBIRDS: If you weren’t here, you don’t know what happened.

BRYCE BOGART: The students that led and participated in those peaceful protests and demonstrations were simply fighting to make this school a better place for all of us.

DANIEL MEDRANO: And a campus with oppression, racism or hate toward any identity? You cannot do that.

JASMYN BARR: We are not crybabies. We are adults who realize that we will face many adversities in our lifetime…

PARKER DONOVAN: …We have the power and the voices to change it here on our campus.

CHLOE GREEN: And by our campus, we do mean everyone’s.

MARTISE HARRIS: Our school is not a scary place to be. It’s a place that is openly working on its climate to liberate the students who are being shamed because they care about the future and culture of Mizzou.

ALIYHA HILL: So, before you attempt to give a summary…

TOGETHER: Make sure you know the story.

MORE: Melissa Click says she ‘was not as polite’ as she should have been