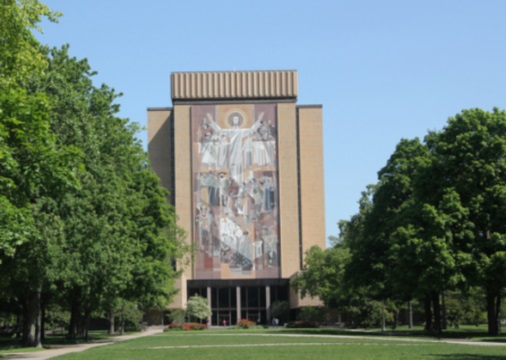 As the University of Notre Dame resumes classes next month, new and returning students will be greeted by a major campaign that aims to provide support for the campus’ Gay, Lesbian, Bisexual, Transgendered and Questioning community.

Administrators have recently hired a fulltime employee to implement a pastoral initiative titled “Beloved Friends and Allies: A Pastoral Plan for the Support and Holistic Development of GLBTQ and Heterosexual Students at the University of Notre Dame.”

Several campus sources confirmed the new hire in interviews with The College Fix, however campus officials declined to comment on the matter.

The new student development professional is expected to oversee a student organization tasked with providing a variety of peer-to-peer support services for Notre’s Dame homosexual students and their heterosexual allies, as well as develop initiatives for “out or questioning students,” according to the pastoral plan.

The employee is also tasked with organizing “speakers, conferences, retreats, support groups, and other programs all designed for the support, holistic development, and formation of GLBTQ and other members of the Notre Dame community,” the plan states.

Campus officials declined to answer requests from The College Fix for an estimated price tag for the plan’s implementation, as well as the annual salary of the new employee.

The multifaceted pastoral plan was approved in December after a five-month review process conducted by the Office of Student Affairs, which had commenced a comprehensive review of the campus’s structures and services available to Notre Dame’s gay community and its allies at the request of university President Rev. John Jenkins.

Jenkins approved the final plan, which was the outcome of “a careful review of Catholic doctrine and teaching, listening sessions with members of the Notre Dame community, and consideration of structures present at peer Catholic institutions,” according to the document.

The new student organization—“PrismND”—is allowed to “retain both autonomy and accountability in all its programs and initiatives,” the plan states. At the same time, “due consideration is to be exercised to as to avoid any political or social activities that might compromise Notre Dame’s Roman Catholic allegiance and commitments,” it adds.

The initiative’s founding documents manage to walk a fine line between endorsing homosexuality and condemning it, citing the Catechism of the Catholic Church, which states “homosexual persons are called to chastity” and should build up “the virtues of self-mastery that teach them inner freedom.” The plan adds “sexuality is ordered to the conjugal love of man and woman.”

The plan also quotes the Catechism in affirming every person identifying as gay or lesbian “must be accepted with respect, compassion and sensitivity. Every sign of unjust discrimination in their regard should be avoided.”

John Cavadini, director of the Institute for Church Life—one of the cooperating organizations listed in the plan—told The Fix that “the ICL does not figure in the implementation of the plan.”

“However,” Cavadini went on, “the ICL, under my own leadership, has created a little consultation, which we are calling a stadium, on faithful gay Catholics… We will be having a symposium of papers in November, hopefully using Church teaching to stretch the ecclesial imagination so that we can conceive of good pastoral strategies.”

Student leaders who participated in the plan’s drafting expressed encouragement this week at the steps Notre Dame—recently ranked fifth in Princeton Review’s annual listing of gay-unfriendly universities—has taken to reverse that perception.

“This is a very exciting time for the Notre Dame community,” student body president and senior Alex Coccia, a leader in the push for GLBTQ inclusion at Notre Dame, told The Fix.

Still, others were wary that while the letter of the plan was unproblematic, the implementation of the plan—which hinges largely on the new faculty member who will oversee it—could be a different matter.

Rev. Bill Miscamble is quoted as saying that “much will depend on the implementation of the ‘Pastoral Plan,’ but such an organization seems likely to develop into an advocacy group promoting the gay lifestyle.”

“This will run counter to the professed goals of the plan and will be very damaging to the Catholic mission and identity of Notre Dame,” he concluded.

The Most Reverend Kevin Rhoades, Bishop of the Catholic diocese in which Notre Dame is nestled in South Bend, Ind., expressed a similar sentiment.

“It is vitally important that the Foundations of the Pastoral Plan, which express Notre Dame’s fidelity to Catholic teaching, inform and guide the implementation of the Plan, including the vision, programs and activities of the new student organization that is being formed,” he said.

“It is my hope and prayer that the rich Catholic teaching on sexuality, teaching that serves the true good and happiness of the human person, will be embraced by the students and all involved in the implementation of the Pastoral Plan.”

Fix contributor Michael Bradley is a student at the University of Notre Dame.